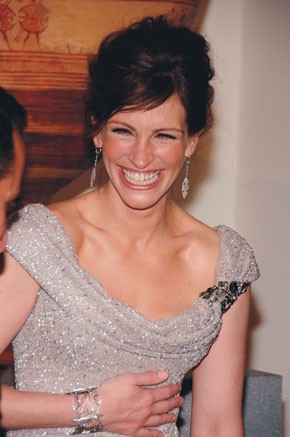 Now for the tough question: How will they top it next year?

While no one was running as fast as a speeding bullet or leaping tall buildings in a single bound, what Giorgio Armani, Anna Wintour and the Metropolitan Museum of Art’s Costume Institute pulled off Monday night at the “Superheroes: Fashion & Fantasy” gala was no mortal feat. The red-carpet stairs were as glutted with first-name-only superstars as any Oscar ceremony: George, Julia, Tom, Katie, Eva, Scarlett, Naomi, Karl, Marc, Dries, Nicolas, Vera, Carolina, Michael and a hefty Italian contingent including Donatella, Domenico and Stefano and Valentino. The whole evening raised $7.3 million.

It was even a lot for Armani to take in. Standing in the receiving line, he said, “I have done this a lot before, but not to a group like this.” And not with stellar co-hosts like George Clooney and Julia Roberts by his side. “They’re exceptional,” Armani said of his sidekicks for the evening. “So simple, so sweet.”

“Lies, all lies,” Roberts chimed in.

The actress was enjoying clowning around with her former co-star, whose humor helped lighten an otherwise intimidating evening. “I’m wearing a skirt under here, and the sequins are really chafing,” joked Clooney, in black tie.

The outfit wouldn’t have been surprising, though, given the exhibition’s theme had some women riskily working a superhero-futuristic vibe. Even Wintour drew heat the next day for her “Star Wars: The Phantom Menace” look, courtesy of Chanel.

Inside the exhibit, Lou Doillon was taking pictures for her superhero-obsessed son and Takashi Murakami was walking around with a radio and microphone, doing a live broadcast for a station in Japan. Marc Jacobs was working the room like a politician, not surprisingly, perhaps, since the speculation is that Marc Jacobs International Company LLC will be the sponsor of next year’s exhibition.

Other guests were busy ogling their personal heroes at the dinner in the Temple of Dendur. Upon spotting Matt Dillon, Louis Vuitton’s Heather Vandenberghe admitted to her table that she once harbored a teenage crush on the actor. Within minutes, a quick-thinking seatmate had brought Dillon over to meet Vandenberghe. “This is the most embarrassing moment of my life,” she said. “I used to have a poster of you hanging above my bed.”

“You mean you still don’t?” Dillon shot back.

“I’ve never seen anything like this, it’s unbelievable,” said starstruck New York Giants quarterback Eli Manning — who nonetheless was the star of the night. While his rival, Super Bowl quarterback Tom Brady, set flashbulbs popping on the arm of a va-va-voom Gisele Bündchen in a barely there Versace, it was Manning who drew the loudest cheers.

During dinner, Vera Wang — who was sharing a bottle of Ketel One with Giambattista Valli — asked for an autograph on her menu. “To Vera, You’re the best. You can dress me anytime,” Manning wrote, before he was whisked away to introduce the evening’s entertainment, a performance from the upcoming Shakespeare in the Park show of “Hair.”

“He’s been practicing all day,” whispered his wife, Abby, on the sidelines.

Unfortunately, the musical numbers weren’t as well received as his speech. Stella McCartney, ever the hippie at heart, raised a candle and sang along to “Let the Sunshine In,” but the rest of the crowd wasn’t as moved. “I wasn’t into the look then, I’m not into it now,” sniffed one designer.

After the performance, guests whisked off to the after parties. Olivier Theyskens and Lauren Santo Domingo hosted a bash at Philippe that was both high energy and exclusive (yes, that was Leven Rambin being turned away at the door).

The narrow space was packed to capacity. Mischa Barton made a beeline for a plate of satays at the bar while Blake Lively and Penn Badgley cozied up in a banquette with their own platter of food. André Leon Talley held court with Venus Williams at the restaurant’s entrance, enveloped in a full-length cape (designed by Karl Lagerfeld, who later joined him) that had attentive p.r.’s glancing anxiously at the nearby votive candles.

Around 1 a.m., Anne Grauso produced a green Shrek-themed birthday cake for husband Mario and after partaking of slices, guests moved downtown to Bungalow 8, where Armani was hosting an ultraprivate affair in honor of Clooney’s 47th birthday. The wall-to-wall with celebrities included Tom Cruise, Katie Holmes, Victoria and David Beckham, Sting and Trudie Styler, Julianna Margulies, Jon Bon Jovi, Domenico Dolce, Stefano Gabbana, Valentino, Donatella Versace, Emile Hirsch and Ellen Barkin. Jessica Seinfeld dished with Holmes on an ottoman, while Armani watched the room from the sidelines, coming down from the rush of the gala. “It’s always fun,” he said, “but it’s mixed with work, too. I don’t even think Anna had much fun.” That’s what Bungalow is for — no work and all play — but the designer still insisted he was going to call it an early night. “Someone my age should be in bed by this time,” he joked.

Armani made sure not to leave before Fergie and John “I told you, George, I don’t sing for just anybody” Mayer crooned “Happy Birthday” to Clooney and then Mayer broke out into “You Make Me Feel So Young.” Of course, Mayer is only 30, so he had to read the lyrics to the 1946 Sinatra hit off his BlackBerry.

PIKE photo BY DIMITRIOS KAMBOURIS/WIREIMAGE; MANNING BY GREGORY PACE/BEIMAGES; BECKHAM BY STEFANO TROVATI/COURTESY OF ARMANI; ALL OTHERS BY KRISTEN SOMODY-WAHLEN AND STEVE EICHNER