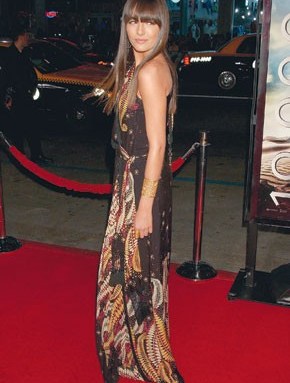 HOPPING ALONG: On Tuesday afternoon, Donna Karan hosted a private lunch and viewing for Parisian jeweler Lorenz Baumer at Karan’s collection outpost on Madison Avenue. The likes of Heather Mnuchin, Jessica Seinfeld, Marjorie Gubelmann and Ulla Parker sat at tables with centerpieces that featured Baumer’s baubles atop bunches of freshly imported green bananas (so fresh, in fact, that a frog popped out of one centerpiece just before the lunch began).

“Pass them down,” directed Caryn Zucker, who along with Sloane Barnett, Nathalie Kaplan and Shafi Roepers hosted the affair. Barnett wore Baumer pieces from her own collection, including a large cocktail ring – equipped with a compartment behind the stone. “It’s for your Valium or your Ecstasy,” the San Francisco-based socialite joked.

FEELING GROOVY: Once the preferred pattern of free spirits during the Summer of Love, paisley is making a chic showing this spring. The teardrop print is popping up at venues decidedly more posh than, say, the grounds at Woodstock. Consider Camilla Belle, Renée Zellweger and Catherine Zeta-Jones, who slipped into sexy, paisley frocks for recent red carpet engagements. Kate Bosworth, whose personal style has always been more pulled-together than thrown-together, donned a printed ensemble for a daytime outing in London.

But leave it to Kate Hudson — Hollywood’s resident hippie-chick — to keep the print tied to its psychedelic roots. The actress matched a paisley mini to a pair of aviator sunglasses, resulting in a look that seemed to channel her free-spirited character Penny Lane in “Almost Famous.”