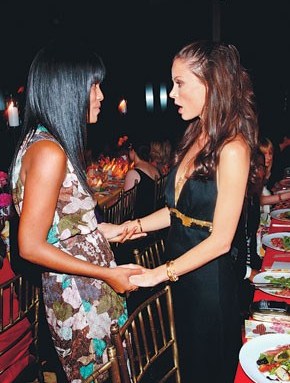 The New Yorkers for Children’s “Fool’s Fete” may be a Manhattan charity circuit favorite, but this year it drew a flock of young Euros, thanks in large part to recent Parisian transplant (and co-chair) Margherita Missoni, whose family’s line, Missoni, was also the event’s sponsor.

Meanwhile, the actress Leighton Meester made it clear she has very different social tactics from her “Gossip Girl” alter ego Blair. “Everyone expects me to be a diva,” she said. “So I’m extrafriendly to show I’m not.”

Mary-Kate Olsen came to dinner straight from a photo shoot, from which she borrowed a Marc Jacobs headband and Yves Saint Laurent heels (her dress came from Margherita’s personal archive). “I had nothing to wear,” she explained, between sips of Amstel Light.

Downtown, folks were celebrating with the hard stuff, namely Belvedere vodka, for which Jade Jagger has designed a bejeweled ice pick called — what else? — the Jagger Dagger. Harvey Weinstein, Alexander Wang, Keren Craig, Alex Kramer and rapper RZA (who also performed after dinner) were on hand for the fete, which had been planned to within an inch by a gigantic marketing team.

Photographs of Jagger posing suggestively with her Jagger Dagger were placed at every table, dagger-wielding dancers chopped at giant blocks of ice all over the room, and lights projected Belvedere’s logo over the bar.

Tara Subkoff got the message. “My favorite vodka is Belvedere,” she said obediently.

The next day, across the country, a five-months-pregnant Vanessa Getty cohosted a luncheon with Nordstrom at Bix Restaurant. It was an honor of Graham Leggat, the Scottish executive director of the San Francisco Film Society, which is presenting an international film festival starting April 24. Getty floated around in a short Lanvin dress (“from Nordstrom,” she noted) and golden ultrahigh Dior stilettos.

“I wanted to gather the most stylish women in San Francisco,” said Getty to her 40 guests, which included Connie Nielsen, Shannon Bavaro and Yurie Pascarella. “I know you’ve got school pickups and soccer matches later, but for the moment, it’s all about fashion and film.”