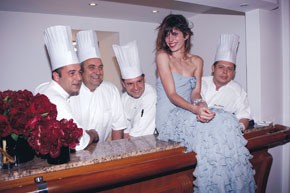 The second annual Dior and French Elle dinner on the terrace of Eden Roc Friday night drew its share of PYTs — Amira Casar, Milla Jovovich, Lou Doillon among them — to honor cover girl Sharon Stone (an upgrade over last year’s guest of honor, Mischa Barton). “I’ve known John [Galliano] since I was 14, so of course I wouldn’t miss this,” said Jovovich, which was a little ironic since the designer wasn’t present so Sidney Toledano was playing host.

The affair went on until just past midnight, when guests boarded Dior shuttles back to Cannes for Dolce & Gabbana’s fifth annual La Dolce Vita fete at Bâoli (professional party girls Jovovich and Doillon managed to change on the way). As usual, the designers held court on the dance floor, while the teeming crowd perched on any available surface to bump and grind to old Madonna songs. Even Scott Speedman got into the groove, while Rose McGowan chatted up a soccer star and his bodyguard. Kate Hudson and Lance Armstrong didn’t go unnoticed smooching in the crowd, near Natalie Portman and Devendra Banhart. “I’ve got to wear this shirt again tomorrow,” said Armstrong, trying to keep clear of Champagne (he never heard of laundry service?).

Doillon summed up her thoughts on the advantages of fashion over film: “Movies are such a pain because you can never count on getting the money. That’s why I love fashion — there’s always funding.”

On Thursday, celebrities and designers made their way up to the Moulin de Mougins for amfAR’s 15th annual Cinema Against AIDS gala. As usual, Stone presided over the auction, but she shared the spotlight with Madonna, who was making her first appearance at the film festival with her documentary, “I Am Because We Are.”

“For those of you who thought we were two bitches who hated each other, I have news for you,” said Stone, who rallied the crowd, including Valentino, Dean and Dan Caten, Giuseppe Zanotti and Roberto Cavalli, to each pitch in $100,000 to build a pediatric AIDS center in her name.

Among the other goods auctioned off for a grand total of $10 million were a private two-song concert by Madonna; a one-of-a-kind Chanel alligator bag (to which Madonna added her lip gloss and blotting papers, though not her BlackBerry, saying: “You couldn’t afford it”); a Dior diamond phone, and travel packages for Paris and Milan Fashion Weeks. “Like we have to pay for that,” laughed Stavros Niarchos.