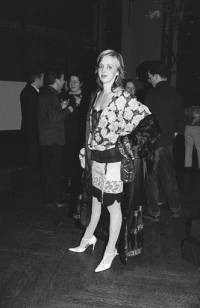 Domino Effect: Annie Lebowitz has a buyer for her London Terrace penthouse even though she won’t move out until the much-publicized fallen wall at her new West Village digs is patched. And just who has acquired the photographer’s rooms with a view? Sources say artist Ross Bleckner will trade in his White Street palace for luxe Chelsea living.

Shakespeare in the dark: The first full-fledged performance of “Twelfth Night” at the Brooklyn Academy of Music on a candle-filled stage Friday drew sighs of delight from the audience and sighs of relief from the actors of London’s Donmar Warehouse theater company, who were simply happy to have made it through. “This theater is just so much bigger than the Donmar,” said Emily Watson, who plays Viola in the production, directed by none other than Sam Mendes.

Watson, looking appropriately Brooklyn in a pair of worn-in jeans, greeted well-wishers Salma Hayek and Edward Norton at the after-party sponsored by Emporio Armani. “I’d love to do more Shakespeare, but I’m dyslexic,” said Hayek. “Sometimes I mix up the words and that’s no good.”

For her part, artist-about-town Hope Atherton laid plans to include more theater in her future. “The show was so good it makes me think I should get out more,” she said.