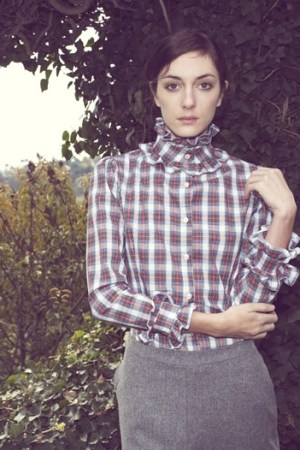 Most folks couldn’t stand wearing a school uniform, but not Minnie Mortimer. The product of Brearley and Sacred Heart (she’s Topper’s little sister) has taken inspiration from those halcyon days to inspire her latest eponymous collection, which will be feted tonight with a party at the Cooper Square Hotel.

“I love the way everyone looks when they are in a uniform, but with the pops of color and individuality that you add to them,” says Mortimer, who even back then was customizing her schoolwear by altering hemlines, playing with accessories and having her jackets lined. “One of my [new] dresses is like the Brearley uniform. I loved it, but you stop wearing it in fourth grade. This is my grown-up take on it.”

The tiny, eight-look collection retails from $128 to $385 and includes a striped T-shirt dress, a khaki shirtdress with a sweetly pleated skirt and a ruffle-necked plaid shirt paired with a sensible grey skirt. Mortimer was also inspired by photographers Tina Barney and Slim Aarons, and movies such as “The Last Picture Show” and “Network.”

It’s the first full collection from the accidental designer, who doesn’t have any formal training but got her start by having dresses custom-made at men’s shirtmakers. Friends started asking to buy some themselves and what was a hobby quickly grew into a line that’s sold at 25 stores nationwide. “I always do things, really selfishly, that I want to wear,” says Mortimer, who left her New York City roots for Malibu, Calif., where she lives (and surfs) with screenwriter husband Steven Gaghan and new baby Tuesday. “Men have that thing, when you go into their closet, they have rows of shirts. You put it on and you look pulled together. I wanted a uniform too.”