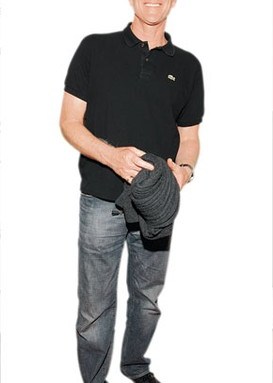 The green scene these days is glutted with actors like Cameron Diaz, George Clooney, Leonardo DiCaprio and Brad Pitt. But Matthew Modine — who studied oceanography­ in college, thank you very much — was hugging trees long before most other celebrities were driving their Prius cars to organic farmers’ markets.

Now the star, whose career spans from “Full Metal Jacket” and “And the Band Played On” to “Transporter 2,” has teamed up with Tumi to support his initiative, Bicycle for a Day, a charity designed to encourage the public to swap gas-guzzling cars in favor of eco-friendly transportation. In honor of Earth Day, the accessories label will launch its Alpha Collection tonight at Manhattan’s Chelsea Arts Tower, where Modine will unveil an exhibition of photographs he snapped while visiting a reforestation project in the woods ravaged by California’s recent wildfires. (He’s also busy this week promoting “I Think I Thought,” a short film he wrote, directed and stars in that premieres at the Tribeca Film Festival.

Here, Modine, 49, speaks to WWD about being green.

Matthew Modine: One always has to have a backup plan. My father taught me to paint with watercolors when I was a boy. One of the most important things when you are painting with watercolors is understanding values of light, and photography is all about light. But I never got really, really into photography until my friend gave me a Rolleiflex camera. I was going to work with Stanley Kubrick on “Full Metal Jacket.” Stanley was a photographer before he was a filmmaker and my friend said, “This would be a great way for you to break the ice with Stanley.”

WWD: When did you first become concerned with the environment?

M.M.: I studied oceanography at Southwestern College in Chula Vista, Calif. It was so depressing that I dropped out. My professor made it feel like the end of the world was near. It was right after the first gas crisis and Jimmy Carter was in office.

[My family] always recycled. But we didn’t call it recycling then; we called it trying to make some money.

WWD: Are you nervous about people seeing your work?

M.M.: A little bit. The idea of “celebrity photographer” makes me want to choke. What does one have to do with the other? Art is art is art. I’m never going to allow myself to be pushed into a category.

WWD: Are there any other eco-friendly causes that you’re involved in?