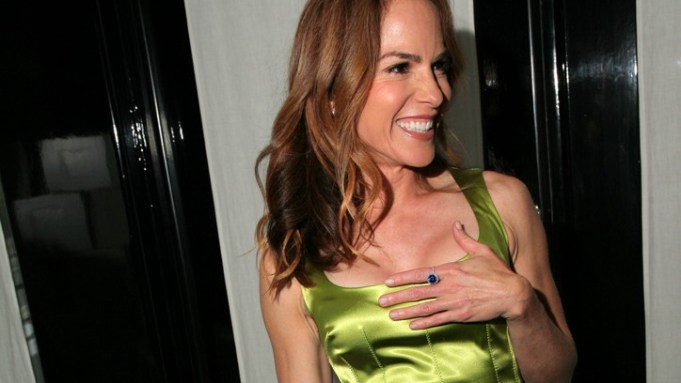 In Gigi Levangie Grazer’s novel “The Starter Wife,” the spouse of a Hollywood magnate has to figure out what to do when her husband leaves her for Britney Spears. In her new novel, “Queen Takes King,” the action takes place on Park Avenue — 740 Park, to be exact — where a woman has to figure out what to do when she learns on Page Six that her husband of 25 years is having an affair with a morning show anchor. The saga in the book appears to be inspired by the divorce of Les and Nancy Moonves, but the CBS honcho is taking it in stride. He showed up to Grazer’s book party at Mr. Chow in TriBeCa on Thursday with his new wife, Julie Chen, and Grazer swore that all is well. “He’s my muse,” Grazer admitted, as Julianne Moore, Amanda Hesser and Candace Bushnell mingled nearby. “I’m forever grateful to Mr. Moonves.”

The Chateau Marmont got its share of fashion action last week. MaxMara hosted a lavish dinner at the hotel on Wednesday. And on Thursday night, Ginnifer Goodwin played hostess at a dinner for Australian brother-and-sister design duo Marc Freeman and Camilla Freeman-Topper. But the actress admitted she’s no fashion plate. “I fully accept that I need a stylist and a hair and makeup person in my life,” said Goodwin. “I’m not good at doing it on my own.”