Eye: The Morning After

Her flight from New York after the Met gala was canceled and rerouted through Miami, and her luggage got lost, but Stella McCartney didn't let travel... 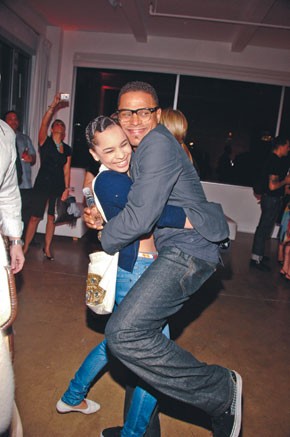 Her flight from New York after the Met gala was cancelled and rerouted through Miami, and her luggage got lost, but Stella McCartney didn’t let travel snafus spoil her trip to Los Angeles Tuesday. “I’m cool, man,” said the mother of three in a mock drawl, as she arrived at her Beverly Boulevard boutique. “Luckily, I had a suit on hand. Now where’s the pizza? I’m starving.” The pie, delivered specially from Pizzeria Mozza, was served in the brick courtyard done up to resemble an English garden with a patch of grass, a fountain, white garden roses and boxwood hedges. Lounging about on the white linen couches were Charlize Theron and Stuart Townsend, Frankie Rayder, Amber Valletta, January Jones, Rashida Jones and Christian Louboutin (who also flew the post-Met red-eye in order to make his own trunk show at Barneys New York on Wednesday).

“I was in a fuzzy robe and breast-feeding before I came,” said new mom Jennifer Maguire. “But this Stella trench covers everything. I could be wearing just my underwear and you’d never know.”

This story first appeared in the May 8, 2008 issue of WWD. Subscribe Today.

Met holdovers who were still in New York on Tuesday dutifully trekked to Grand Central Terminal for a luncheon honoring party planner Antony Todd, hosted by A Diamond Is Forever. (The diamond jewelry they all received as a gift may have had something to do with it.)

Helena Christensen had made an early night of it. “It’s the worst when you show up and see the other parents when you smell of alcohol,” she said. Diane Kruger looked none the worse for wear in her ultramini Balenciaga dress. “It’s a bit embarrassing to wear walking around in a train station,” she said, laughing at herself. The Ladies Who Lunch were joined by Natasha Richardson, Maggie Rizer, Margherita Missoni and a Laddie Who Lunches, Rufus Albermarle.

That night, Claire Danes and Kim Gordon hit Opening Ceremony to check out Nike’s new Liberty print Dunk high-top, while Agent Provocateur hosted a bridal-themed bash at the roofdeck atop Milk Studios to fete a short film entitled “White Wedding,” in which Kate Moss struts around in a veil and matching undergarments.

“I told my brother there would be cute girls here,” said Lake Bell, surrounded by a crowd that included Julia Restoin Roitfeld, Zoe Kravitz and Rinko Kikuchi. Unfortunately for Bell’s brother, Moss arrived early, smoked a cigarette on the balcony and made a swift exit before most guests had even arrived. In the model’s absence, Agent Provocateur founder Joe Corre filled in the blanks on the film’s tag line “Let them eat Kate.” “Everyone is always on Kate about her personal relationships and the cocaine,” Corre said. “This is her way of saying, ‘You can all eat me.'”

In London last week, Thandie Newton, Nigella Lawson, Lucy Yeomans and Lavender Trust founder Justine Picardie hosted the charity’s 10th anniversary party and auction at Claridge’s. Guests placed bids in a silent auction, the proceeds of which went toward the trust, which supports young women with breast cancer. Sophie Dahl donated a home-cooked meal — with her beau Jamie Cullum accompanying on the piano — and Newton offered to sing at a party. “Weddings, bar mitzvahs, we’ll come to you,” the actress joked before breaking out into “Islands in the Stream.”