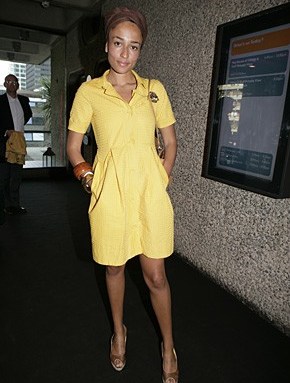 When Viktor & Rolf turned London’s Barbican gallery into a doll house Tuesday night, with their past collections displayed on scores of porcelain dolls, guests became very nostalgic. “I filled up when I saw it,” said singer Roisin Murphy, who was dressed in a pink baby doll dress with a PVC Pierrot collar from the Dutch design duo’s spring collection. “It’s a little girl’s dream.”

Murphy joined guests including hosts Viktor Horsting and Rolf Snoeren, Princess Mabel von Oranje-Nassau, Roland Mouret, Hussein Chalayan, Mischa Barton and Zadie Smith. In lieu of a red carpet, the crowd traipsed in on a black one strewn with pink rose petals – in reference to the designers’ Flowerbomb fragrance – and drank rose martinis with pink petals floating in the glass.

Artist Grayson Perry – who was dressed as his doll alter ego Claire – gave the fashion-meets-art exhibition his seal of approval. “I’m not usually a fan of fashion exhibitions, as you can just feel the dust settling,” said Perry. “But they are the artists of the fashion world.”

Earlier in the week, guests descended on the far more sedate surroundings of the Getty family’s estate in Wormsley, Buckinghamshire, for the De Beers Cricket Cup. The event was in support of Tara Getty’s Africa Foundation for African communities and conservation.

A crowd who included Ben Elliot, Imogen Lloyd Webber, Matthew Freud, Kelly Hoppen, Nicky Clarke, Saffron Aldridge, Rupert and Elisabeth Murdoch and Emily Oppenheimer sipped Champagne and Pimm’s while they watched teams play on the late John Paul Getty’s private cricket pitch. But not all the guests were there for the sporting action. “The last time I played cricket, it was the last time I could see my feet,” joked Clement Freud.