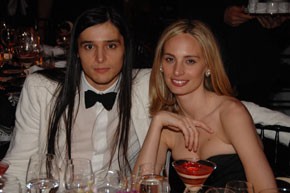 TRAINING DAY: Navigating a crowded party in an evening gown is no easy task, but principal dancer Irina Dvorovenko took the feat to new lengths in her performance Monday night at the American Ballet Theatre’s annual Spring Gala sponsored by Nina Ricci and Graff and held at the Metropolitan Opera House. In the pas de deux “Splendid Isolation III,” part of the evening’s program of short excerpts, Dvorovenko maneuvered a dress train that had co-chairs Tory Burch, Susan Fales-Hill and Anne Grauso – along with Narciso Rodriguez, Heather Mnuchin, Lauren Santo Domingo, Fe Fendi, Jamee Gregory, Taylor Momsen and Muffie Potter Aston – in awe of her skills. Though for some, it inspired more technical musings.

“I wonder what fabric it was,” said Lazaro Hernandez.

A few guests admitted to dancing aspirations of their own.

“I wanted to be a ballerina… which is why I never became a ballerina,” joked Olivier Theyskens, who had just flown in from Cannes and was headed back to Paris the next day.

“I wanted to be a modern dance choreographer when I was 18,” recalled the actress. “But all my friends who were in ballet had no money.”

CHOPARD TAKES CANNES: Chopard’s annual Trophy party, held this year at theCarlton, was the usual star-studded affair: Gwyneth Paltrow, Salma Hayek, Christina Ricci. Newbie honoree Omar Metwally was a bit shellshocked. “All I wanted to do was stay in my hotel room and hide,” he said, “but I”ve been embracing all of it.”

“I’m an actress, so for having only done one film [Ang Lee’s “Lust, Caution”] I feel incredibly lucky,” said Tang Wei, another honoree. She also felt lucky to have connected with Roberto Cavalli, who designed her gown.

“Wearing his dresses, I feel like we have a soul connection,” said the former model. Though she was supposed to be wearing black to mourn the earthquake victims, like Zhang Ziyi, Wei got a pardon to celebrate in Cannes by having Cavalli and Alberta Ferretti make donations to earthquake relief.

Stars stayed out until 4 a.m. boogying to Andy Garcia’s band (which is much more popular here than at home). Hayek stayed on the dance floor until the wee hours, when everyone finally headed home with silver glitter stuck to the bottoms of their stillettos.