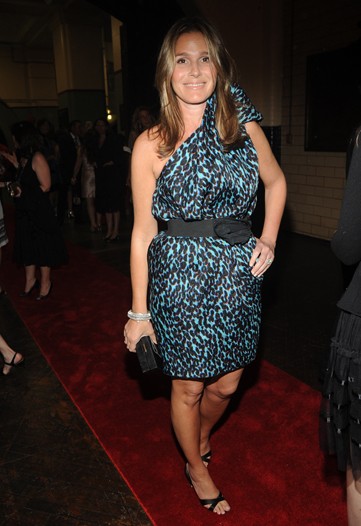 It appears ladies these days aren’t terribly concerned about being snapped in a dress that’s already seen its share of red-carpet footage. Case in point: Lanvin’s blue, leopard print, asymmetrical cocktail number from the spring collection. Maggie Gyllenhaal christened the frock’s public outing, wearing a long, belted rendition to the Golden Globes way back in January. And, despite earning some critical barbs (“too busy,” sniffed one Internet site), the look clearly has staying power. Pedro Almodóvar star Bibiana Fernández sported the runway version to the “Los Abrazos Rotos” premiere in Madrid, while model Charlotte Collard wore it to the Galerie Gmurzynska dinner during the Basel Art Fair. And in New York, Aerin Lauder and Lisa Airan paraded the one-shoulder wonder at the FiFi Awards and Gordon Parks Foundation gala, respectively, with a mere week separating their appearances. That’s why it’s called a step and repeat.