The Fabulous Faces of Sophie Okonedo

LONDON — Too young to be a legend, but old enough to be classified as distinguished — and beloved — here in Britain, the stage, film and TV actress Sophie Okonedo has found herself taking up the unlikely role of JW Anderson’s model for the fall 2021 men’s and pre-fall women’s collections.

The Tony Award-winning, Oscar- and BAFTA-nominated actress has lately been freaking out viewers with her turn as Charlotte Wells, a stylish psychiatric patient with multiple personalities, in the Netflix series “Ratched.”

She caught Juergen Teller’s eye, and he proposed shooting her for Jonathan Anderson’s latest collections, which debuted online on Wednesday with a film and a series of posters. The images, shot in Teller’s studio, have nonsensical scribbles on them, such as “UFO sighting,” “Man from behind,” or “Check mate with banana tree,” giving them an absurdist feel. 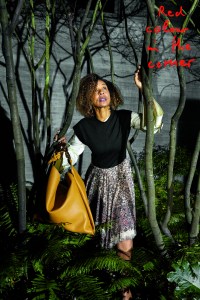 Okonedo, a Cambridge graduate and Academy Award nominee for her supporting actress role in “Hotel Rwanda,” takes on a different persona with every new look: contemplative hipster in a chunky knit hoodie and trench; vexed bohemian mom in the woods, and channeling David Bowie as Aladdin Sane, dressed in feathery white, sculptural trousers (and holding a big, phallic marrow).

“It’s my first foray into fashion. I’ve obviously been a fan of Juergen’s pictures for a long time, and Jonathan’s designs spoke my language — they’re quite theatrical — and they have character. They are an event,” Okonedo said in a telephone interview from her home in the countryside.

“It was like each time I put on an outfit, I was a slightly different character. All day I laughed and played — and that’s a pretty good way to spend the day,” she said.

Okonedo added that she and Teller only properly met after the photographer watched “Ratched” on Netflix. “He saw me and thought ‘I’ve got to photograph that crazy lady, and all those characters.’ And then this came up, and he thought I’d be really good for it.”

Anderson had already tapped Teller to shoot the fall men’s and women’s pre-collection, and they quickly agreed that Okonedo should be part of the cast.

“Juergen is more of an artist than image-maker, I think he’s like one of those people who can really capture the essence of someone. So, he wanted to shoot Sophie, and I wanted to, too,” Anderson said. “I think her performance in ‘Ratched’ was just unbelievable. She completely transforms.”

Okonedo has been one of the few fortunate actors who’s been working steadily over the past year, during and in between lockdowns. It’s a new and slower-moving world, with serious on-set protocols — and she’s happy to be a part of it.

“Filming, kind of strangely, works. People wear masks, there are screens, and then you have your bubble, made up of the person who dresses you, and does your hair and makeup. No one else can come into your bubble.

“We’re all getting tested a lot and the protocol on set makes things slower — you can’t do as many things, and you have to pace yourself. But it works, and everyone is so grateful to be at work. I love my job and when I couldn’t do it for a few months I felt it was quite hard. It’s been a privilege to be able to carry on,” she said.

Okonedo has been filming the TV series “Britannia” and “The Wheel of Time,” and also stars in “Death on the Nile,” the release of which has been postponed until later this year.

“Britannia,” a Sky Original drama, is set during the Roman conquest of Britain a little more than 2,000 years ago, and Okonedo plays Hemple, the head of a cult. “She’s very dark; very, very naughty; and gets up to all sorts of mischief. It’s really, really weird — good fun and good costumes,” Okonedo said. 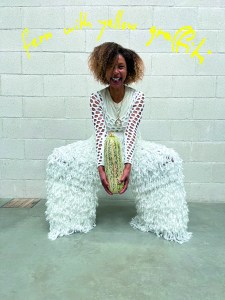 She declined to talk much about “The Wheel of Time,” which is set to premiere on Prime Video, and is based on a series of popular fantasy novels by Robert Jordan. Okonedo will appear alongside fellow British actress Rosamund Pike.

Theaters are shut on both sides of the Atlantic and that has been hard for Okonedo, who won a Tony Award in 2014 for “A Raisin in the Sun,” and was nominated for a second award for “The Crucible” two years later.

She had been hoping to put a play on with a friend, and had the writer, actors and director lined up, “but we had to let go of that for the time being because it can’t move.”

But she’s booked to work most of this year, and when she’s not on set, she’s been trying to get her own projects off the ground, bringing together writers and directors.

“It’s all quite slow and I’ve never done it before, but it’s been real fun. And I think that’s the way forward. You can’t just wait for things just to come along to you. What I really enjoy is the process of creating the character. I’d like to be there much earlier on in the process.”

She’s also loving the offbeat opportunities that have been coming her way. “I wouldn’t have ended up doing this wonderful photo shoot if we were not in this situation. I know a lot of this is happening because there isn’t all the catwalk stuff.”

The actress admitted that she’s not a natural model. “I’m rather camera shy — Juergen brings out a different side to me. He makes you feel incredibly relaxed, and gets you to be quite free in front of the camera.”

In addition to returning to the stage, Okonedo will also be hitting the dance floor once lockdown lifts.

“I’d really like to go dancing in a place — with lots of people. I’ve been doing these great online dance classes with Ryan Heffington’s [L.A. dance studio] The Sweat Spot. I did a whole disco routine this morning,” she said with a big laugh.