Facing Up To It 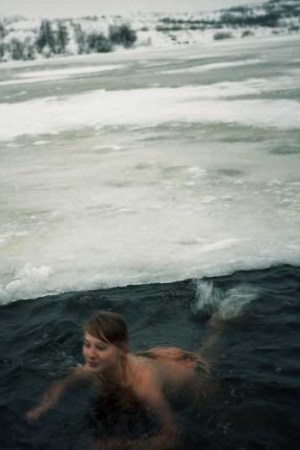 When Yola Monakhov was a little girl in Moscow in the Seventies, her parents sent her out in the dead of winter with a handful of kopeks to get ice cream. Coming home, she says, she was overtaken by a gang of punks who pulled her hat over her eyes and stole her ice cream. “When I came home in tears,” she says, “my parents gave me more kopeks and sent me back out.”

It’s been almost 30 years since those days, and Monakhov is now a photographer in New York. So much has happened since that distant winter: She immigrated to New Jersey with her family; studied Italian literature at Columbia University; photographed the war in Kosovo and then the U.S. invasions of Afghanistan and Iraq, and always—always—found herself thinking about, and then going back to, Moscow, going back into the cold, exploring a part of her that never grew up.

In December, Monakhov, 33, who has shot for The New York Times and Newsweek and is a regular contributor to The New Yorker, returned again to Russia to shoot a series of portraits. (Full disclosure: This writer was one of Monakhov’s subjects.) Her show (as yet untitled) runs May 1 to June 21 at the Sasha Wolf Gallery in New York’s TriBeCa. Monakhov’s pictures include oligarchs’ wives and girlfriends, artists, old people, middle-aged people and ordinary people. Most of the images come from Moscow, but there are also pictures from Saint Petersburg, Yekaterinburg and elsewhere.

“A person I photograph is not interesting to me because he is a rich Russian or a young Russian, but because of the opportunity to have a woman, for instance, entrust to me the depiction of her, or something in her spirit,” she says. “It is a conquest that I make, but, I hope, an honorable one. And it is not a coincidence that most of my subjects are women.”

Monakhov is discussing her upcoming show over a lunch of baba ghanoush and lamb kebabs at Marakesh. Outside is Pushkin Square, which seems somehow appropriate: The square, at the intersection of Tverskaya Ulitsa and the beautiful Bulvar (or Boulevard), has always been a locus and symbol of discontent, reflection, revolt, piercing images. This is where the democratic opposition congregated in the last years of the Soviet Union; it is where today’s activists like to meet, waving banners and megaphones.

She talks about Russian faces. She remembers that, after her father returned to Moscow in the Nineties, he was so excited riding the metro and seeing all the Russian faces with their different hues and shapes and dispositions, faces you couldn’t find so easily in the U.S. Monakhov is more reticent about defining a Russian or non-Russian face, however.

“There are so many ethnicities woven into the fabric of the Soviet Union, and they flourish today, with many diverse people living in Moscow,” says the photographer, who is half Russian and half Jewish. “I myself get taken for Chinese, or sometime for Latina, and I value this mutt nature of the Russian face, the classic Russian at war with the not-classic.”

What does it mean to be Russian, Monakhov asks, when so many Russians are a complicated mix of peoples and places—Slavs, Jews, Armenians, Buryats?

More captivating to her than ethnic delineation is the history or natural surroundings imprinted on her subjects’ profiles, the ways in which a face actually conforms to its environment.

“One thing I love is to think I see certain things in people’s faces and gestures, such as the sea in the people of Murmansk”—in Russia’s far north, on the Barents Sea—“or potatoes and tallow candles in someone still young, or a deep literacy. Russians will often say of a given individual that he or she has an intelligent face. This is something I value.”

As for the country’s capital, it’s taken for granted by many that Moscow is not Russia, that the city, with all its wealth and power and neon lights, is not simply bigger and brasher (like Paris, London or New York), but somehow deeply, both by character and physiognomy, removed from the rest of the country. Is this true?

Monakhov is not so bold (or naïve) to try to answer this question once and for all. What’s clear, she says, is the tension, the convoluted history, between Moscow and the rest of the country, a tension that can be seen in Muscovites, in their behaviors and faces and the way they speak and think and even feel. This has made photographing them more challenging and colorful.

“Moscow is a great city,” she says. “It is so much more than can be comprehended by a mere outsider like me, as much as I claim to be a Muscovite.”

Sasha Wolf, whose gallery will host the exhibit, says of Monakhov: “There’s often a subtle playfulness or daring in her compositions. But, aesthetics aside, there’s always an authenticity of subject that pushes through to the foreground. It’s this authenticity, above all else, that I really love.” Wolf says it’s unknown how many images will be displayed. The average price tag for a photograph, she says, is $2,200.

Back at Marakesh, Monakhov is sounding burdened by the weightiness of her subject matter. Russia, as she well knows, is infinitely deep, pained, suffering, joyful—teeming with emotion. There is a fatalism and a pessimism and a hopelessness wrapped in poetry, all of which must be daunting for any photographer to try to capture.

All around are New Russians sporting Dolce & Gabbana jumpsuits and smoking hookahs and laughing uproariously. Outside, the sky has turned white, vast.

“The Russian tends toward modesty in the face of greater forces,” Monakhov says. “There’s a common expression: ‘We make plans; God makes decisions.’ These relationships between the great forces—leadership, the gifts and privations of the divine, the stain of history, the chances for consolation—are visible to the observant eye, and I wish to make them visible in my photographs.”