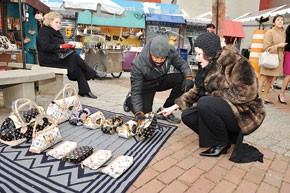 “Psst, check ’em out, check ’em out, nice handbags, we’ll set you up,” an ominous hooded figure hissed, surrounded by Louis Vuitton Murakami bags outside the Brooklyn Museum. The salesman was one of 10 vendors hawking authentic Vuitton gear who’d set up shop Thursday night in the courtyard, a sort of faux Canal Street, in honor of the new “© Murakami” exhibit and Brooklyn Ball.

“It looks like a bazaar, it’s hysterical,” Linda Evangelista said as she swanned inside.

Helen Schifter couldn’t help but participate in the scene, snatching up a mini-bottle of Moët from a hot dog cart. “I should really be a Champagne seller,” she said, shouting, “$5, $5” to everyone as they passed. Marc Jacobs arrived (in an outfit more befitting “Miami Vice” than Brooklyn) with Eva Herzigova, who had shot Vuitton’s fall campaign earlier in the day. “I never bought a fake anything,” he professed. “Not a fake tooth, a fake suit or a fake Coca-Cola. I am 100 percent real.”

Inside, Takashi Murakami, Bernard and Helene Arnault, Yves Carcelle, Richard Prince, Japanese artist Chiho Aoshima and Amalia Dayan were among those who wandered through the fifth-floor exhibit. Kristin Davis stopped into the pop-up Vuitton boutique selling Murakami bags and new “Monogramoflauge” paintings, where she admitted she did own a fake Vuitton. But it was a gift, she swears. “I thought, ‘I can’t be seen wearing this,'” she said.

After dinner, guests swiped their Murakami place mats off the tables for souvenirs (Larry Gagosian took a whole pile) and filed into an adjacent hall where Kanye West heated up the crowd with a lengthy live performance. By midnight, a crew of partygoers, including Murakami, had jumped into their Town Cars and sped off to SoHo, where a slick, highly secure and all-white decor after party was held in a vacant loft.