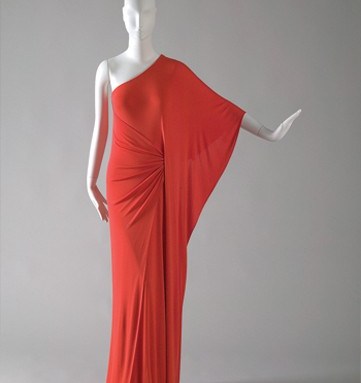 This fall, hunker down in a German bunker with modern art, get nostalgic over Serge Gainsbourg in Paris or see historic couture in Chicago.
— Compiled by Elisa Lipsky-Karasz

FASHION
Sure, Chicago is famous for its deep-dish pizza and architecture, but fashion? An exhibit at the Chicago History Museum attempts to prove the Second City has just as much fashion sense as its coastal rivals. “Chic Chicago: Couture Treasures From the Chicago History Museum” features more than 60 couture pieces from the institution’s permanent collection, ranging from the Gilded Age to the present day.

“Chicago is chic, it has always been chic, and this exhibit proves it,” says curator Timothy Long, who collaborated on the project with Valerie Steele, the director and chief curator of New York’s Museum at the Fashion Institute of Technology. Highlights include a Twenties Lanvin “robe de style,” a 17-pound tulle confection by Charles James and a disco-inspired asymmetric Halston dress. To accompany the show, the museum also will screen a series of on-theme films, including the 1995 Isaac Mizrahi documentary Unzipped.

“All the pieces on display have some significance to costume history, and, of course, they were all owned by Chicago women,” says Long. Case in point is a Poiret number donned in 1913 by Windy City socialite Anita Carolyn Blair. “This is the dress that takes us into modern fashion,” says Long of the loose-fitting Victorian piece, “People would have gasped when she wore it.”

FASHION
In the summer of 1962, Douglas Kirkland was just a young buck when Look magazine shipped him off to Paris to shoot Coco Chanel for a photo essay. With the upcoming release of Coco Chanel: Three Weeks/1962, the renowned lensman is offering what feels like a peek-through-the-keyhole of the designer at work and at ease in her Rue Cambon atelier. The book coincides with the 125th anniversary of the designer’s birth.

The photographer and his subject took a shine to each other. All these years later, Kirkland is still at a loss as to why Chanel warmed up to him. Even Karl Lagerfeld was said to have been taken by the shots of Chanel smiling and looking so full of life. “That really pleased me to hear that,” Kirkland says.

Even at age 79, Chanel’s impeccable posture and commanding gait are unmistakable in the black-and-white photos that flow from one shot to the next like a flip book. Of course, the strands of pearls, the hat, the dangling cigarette and scissors-on-a-string lassoed around her neck are other telltale clues. But it’s the images of her hands at work—fixing, clasping, adjusting—that stay with Kirkland. “To me, that’s a picture,” he says.

A former assistant to Irving Penn, Kirkland has photographed numerous luminaries over the years— including Marilyn Monroe, Marlene Dietrich and Angelina Jolie—but his stint with Chanel stays with him. Standing outside Versailles with arms crossed and his coat draped over her shoulders to fend off the afternoon chill is the lasting image he has of her. It is also the curtain call for his journey and the book.

And the European adventure has never faded for Kirkland. “It truly did change my life, and I don’t throw words like that around.”

ART
A veritable celebrity fest, including Marc Jacobs, Keith Richards, Pete Doherty and Leonardo DiCaprio, is expected on the Bowery this fall. Or, at least, their likenesses, as rendered by Elizabeth Peyton, will be there. In the first retrospective for the artist, New York City’s New Museum is exhibiting 100 of Peyton’s paintings, drawings and prints in a show opening October 8. Her signature small-scale oils, which are painted from photographs, are inspired by portraitists such as John Singer Sargent and Andy Warhol and tackle issues of fame and tabloid culture. The exhibit, sponsored by Banana Republic, features many of the 43-year-old’s famous friends from the fashion, art and music worlds, and also includes images of John and Jackie Kennedy, Georgia O’Keefe and one titled Democrats Are More Beautiful, featuring a young Al Gore.

“[Elizabeth] has said that she started making pictures of people that she loved when she was a little kid,” says Laura Hoptman, The Kraus Family senior curator at the New Museum, “and it hasn’t changed.”

Next stop for the show is the Walker Art Museum in Minneapolis, and then the Whitechapel Art Gallery in London.

MUSIC
Serge Gainsbourg—the late legendary French singer, actor, director and poet who remains beloved by fans as much for his experimental music and naughty lyrics as his high-profile relationships with Brigitte Bardot and Jane Birkin—will be given his own show this fall at Paris’ Music Museum. It’s being billed as the most comprehensive exhibition on the artist, who died in 1991, leaving behind a large legacy including the 1969 hit Je t’aime moi non plus.

Curated by producer Frédéric Sanchez (the man responsible for runway soundtracks for Marc Jacobs and Prada), the show includes artifacts from Gainsbourg’s estate arranged to replicate the singer’s legendary digs at 5bis Rue de Verneuil. “What I’ve tried to reconstruct is the way all of the objects were placed in a certain visual way to tell a story,” explains Sanchez, recalling how a series of Marilyn Monroe photos lining the chanteur’s staircase culminate with a shot of her body in a morgue.

Sanchez also reunited an army of Gainsbourg’s leading ladies to read lyrics for the show’s haunting soundtrack, including Birkin, daughter Charlotte Gainsbourg, Bambou, Vanessa Paradis and Catherine Deneuve. “What was mind-blowing was that all of them had kept [Gainsbourg’s trademark] diction. He really directed them,” he says.

Also on display—a witness to Gainsbourg’s famously mischievous ways—fans will find a pile of policemen’s medallions that he collected on his not-infrequent run-ins with the law.

ART
What do you do with a giant concrete bunker from World War II that is the size of an office building and located in the center of Berlin?

If you are the German advertising honcho and art collector Christian Boros, you convert it into a personal art gallery and build a luxury penthouse apartment on the roof. Boros, whose vast collection includes 500 contemporary pieces by artists such as Damien Hirst, Olafur Eliasson and Wolfgang Tillmans, was looking for a place to store it all when he decided to buy the onetime Nazi bunker in 2003. Now his collection is spread out over the structure’s 32,300 square feet, which has been chopped up into 80 rooms with ceilings soaring up to 43 feet.

Besides the artwork it contains, the bunker has its own historical significance. Built in 1942 by Hitler’s chief architect, Albert Speer, the site served as an air-raid shelter, holding as many as 3,000 Berliners. After East Berlin fell under Russian control, the Red Army used the space as a prison. The building then fell into disrepair in the Fifties, when it was converted into a warehouse for fruit and vegetables—with some locals dubbing it the “banana bunker.” But once the Berlin Wall fell, the concrete block had yet another incarnation: as one of Germany’s most well-known underground techno clubs in the wild Nineties.

As Berlin once again transforms itself—this time into a hub for the international art market— it’s fitting that the bunker has become a gallery. Boros’ collection is open to the public by appointment on weekends—but eager art fans, beware: The next available tickets are for December 27.