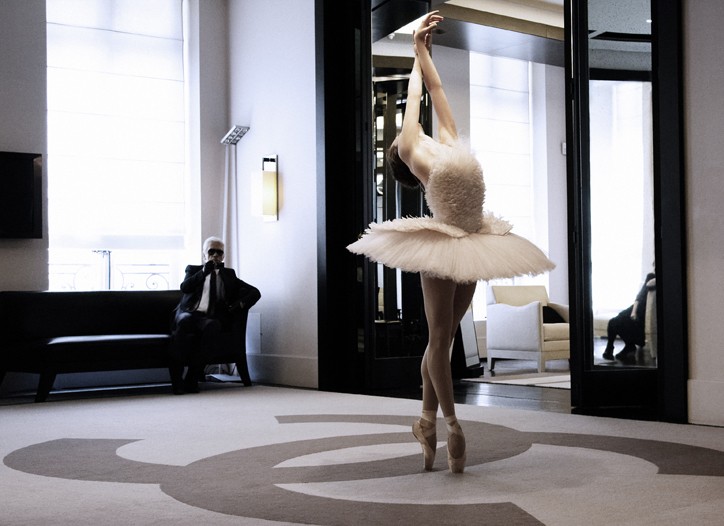 Karl Lagerfeld is becoming quite the moviemaker — and he needn’t roam far to find subject matter.

When Elena Glurdjidze, a senior principal dancer with the English National Ballet, dropped by a Chanel couture salon earlier this month for a final fitting of a costume Lagerfeld designed for her, she gave him an impromptu dance from “The Dying Swan.” He filmed it and the three-minute video, shot in grainy black and white, went live on chanel.com Wednesday.

Glurdjidze’s custom tutu, made of tulle and overlaid with more than 2,500 feathers, took three seamstresses at Chanel’s Lemarié atelier more than 100 hours to construct. “[Your costume] is 50 percent of how you are going to dance,” said Glurdjidze, who will perform the solo at Sadler’s Wells Theatre in London in June as part of the English National Ballet’s season of Ballet Russes. “It is very important to have a beautiful costume.”

Meanwhile, Lagerfeld is slated to arrive in Moscow today to show Chanel’s Paris-Moscow collection of luxury ready-to-wear at the Maly Theater on Friday evening. The line was already viewed in Paris last December, along with a 10-minute silent movie by Lagerfeld about the young Coco Chanel and a cast of characters, many tied to Russia, including Chanel’s lover, the Grand Duke Dmitri Pavlovich. As part of its Moscow festivities, Chanel is setting up a temporary store at specialty boutique Podium and screening “Coco Chanel and Igor Stravinsky,” which premiered last week at the Cannes Film Festival.