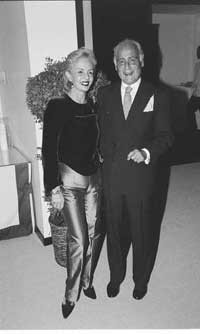 Members of the Masson family, who celebrate the 40th anniversary of La Grenouille this year, have always inspired devotion amongst the jet set. Last Wednesday, the fabulous pack came out in force to honor Charles Masson — not because he runs their favorite restaurant, but because they love his artwork.

Bunny Williams and John Rosselli hosted a viewing party for fans at their uptown garden boutique Treillage, transformed into a makeshift gallery to hold more than 100 of Masson’s paintings, drawings and watercolors — along with several heaping tables of foie gras.

“Each work represents a different scene at a different time of day — mostly in Normandy, where my mother lives,” said Masson.

“And where are the ones of me?” teased a female fan.

“I had to delve into my past for this book,” said Stefanidis with a sly grin.

Indeed, the book’s pages include a picture of his baptism certificate, signed by the Bishop of Babylon, snapshots of the far-flung places that have inspired him, snatches of poetry and, of course, pictures of his design work.

“I find him the most talented man,” Carolina Herrera sighed.

“He wants to bid on the car, but we have enough cars,” said his wife, Helen.

“Oh sure,” said Tim, “but we need more clothes and shoes.”