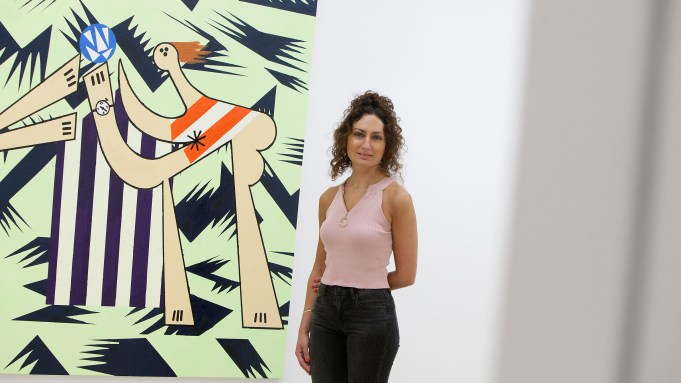 The Paris-based, Belgian-born artist uses geometry as a base language to construct lively works, paying homage to classic subjects — still life, female nudes, the circus — explored by masters such as Picasso and Matisse. Using just a few shapes per work — a circle, triangle, line, or maybe the curve of a crescent moon — she is able to create intricate scenes. Her newest work is on display in a solo exhibition at Almine Rech on the Upper East Side in New York; later this year, Atassi will show work from the last two years in a solo exhibition at the Consortium Museum in Dijon, France.

“I’m trying to create a new vision, a new perspective to these classic subjects,” says the artist, dressed in jeans and sneakers, from the swanky second-floor gallery space. “I make figurative paintings with abstract vocabulary, and all my paintings belong to a vocabulary…all these amazing painters, they created a language, and this language is made to be borrowed. Like any language, you use it. And so I use Picasso language, or also Matisse language, and their language becomes my language.” Even showing at Rech’s gallery is a fitting through line for Atassi’s work: Rech is married to Picasso’s grandson.

In some cases, the references are even more direct; for instance, her painting “The Game” was inspired by Picasso’s “Ballplayers on the Beach.”

“I wanted to make [the players] very big, so changing the size and the focus, changing totally the painting,” she says of the piece, which is somewhat of a departure from her other work: it’s the first time she’s incorporated the gesture of movement into the setting. The two players, midplay, are set against a jagged-pattern background, which becomes the shape of their hair in the wind.

The abstract shapes transform her work into figurative paintings, and Atassi notes that shapes are the building blocks for her work, which start with a construction of a stage upon which to set her subjects. “I like to play with artificiality. It’s really like a theater set,” she says of her process. Using a grid system, she uses shapes to create a spacial pattern that acts as a background and also a way to play with perspective in the work. Those shapes are then referenced within the subjects of each piece.

“I like to curate spaces. I used to do much deeper spaces; now, the spaces are more denied by the pattern that goes over the painting,” she says, adding that her paintings contain two distinct (yet blurred) spaces: the deep space of the patterned setting, and the flat space where her subjects live. The result is a dialogue between the background and foreground, which at the same time work in opposition and compete for attention of the viewer.

Like her use of geometric shapes, her choice of color links each painting, and is also used as a sort of foundational language.

“It’s like a musician having notes and writing a composition — the notes come together. One note by itself doesn’t mean anything, it’s a question of playing associations and with quantity,” she says.

Atassi plays with meta language in her paintings (placing a painting within a painting, or sheet music), and a meta subject links all of the paintings on display: the imagery of a clock, which appears as a watch strapped to the wrist of one of the female still-lifes or sometimes as a freestanding clock. She describes the timepiece as a very graphic and efficient detail, which carries outsize influence in terms of its associations. “I like the symbol of time passing, sort of like history. And also with the woman figures, there’s something about maybe these women are waiting, because they’re seated,” she says.

“Also I think the texture of my painting is a kind of meta language, because it reminds it’s a painting and not an image,” she says, returning to the idea of plays on perspective. “For the viewer, it’s a way to enter the painting and understand that it’s a record for painting. You’re not in an image, you’re in front of something that I made.”