Michael Vollbracht liked to say that he looked at the world in cinematic frames, taking from everyone and everywhere. 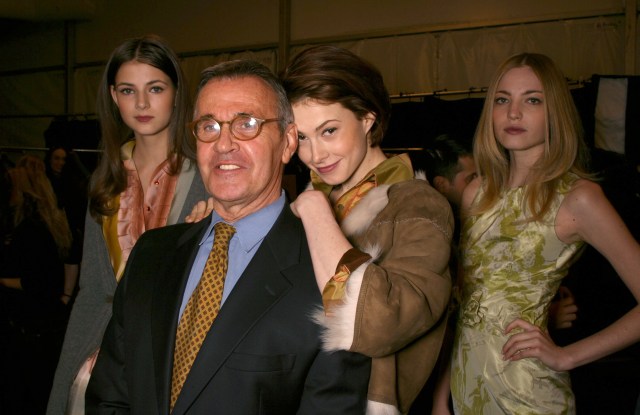 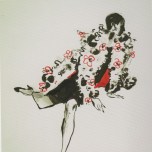 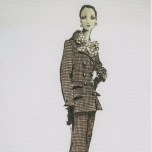 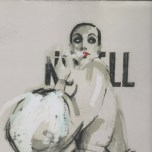 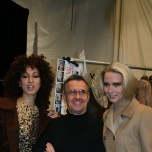 After years of illustrating, Vollbracht broke out on the New York designer scene after starting his own company in 1978 without any funding. His second collection earned him a Coty Award.

An avid movie watcher, who befriended Joan Crawford in the later years of her life, Vollbracht kept her portrait as well as other icons like Greta Garbo, Elizabeth Taylor and Diana Vreeland on display in his oxblood-colored showroom. Having told WWD in 1980, “I owe my talent to American films.”

Later in his career, Vollbracht was largely associated with Bill Blass, helping the designer with his 2002 museum retrospective at Indiana University and later taking over the creative reigns from Lars Nilsson in 2003.

The cause of death is pending an autopsy, but Vollbracht had suffered a series of medical problems in recent months, according to his friend Jeffrey Banks.

A neighbor, who had come over to walk his dog, discovered his body on the kitchen floor with the water in the kitchen sink overflowing, Banks said.

He may be better remembered as Michaele Vollbracht, as he formerly spelled his name when he designed a signature ready-to-wear collection and worked as an illustrator for Henri Bendel and Bloomingdale’s. Iris Apfel said Friday, “He was a Renaissance man — he could do everything. He was a great dress designer and dressmaker, really good at interior design, he could paint and draw beautifully and design all kids of things. And he was the sweetest most fun guy imaginable.”

Born and bred in the Midwest, he graduated from Parsons School of Design in 1969, winning the school’s prestigious Norman Norell award. In a twist of fate, when Norell was unavailable to present it, Blass stepped in. Kay Unger, who along with the late designer Willi Smith was a Parsons classmate of Vollbracht’s said Friday, “He really taught us all to see. Truly, he would say, ‘Get out of the classroom. Walk around New York. Look at the Empire State Building. Look at the doors.’ He really taught us to get outside of ourselves and also to look at ourselves. Who were we? What was our best talent?”

After graduation, Vollbracht worked as an illustrator for Geoffrey Beene sketching Lynda Bird Johnson’s wedding wardrobe among other assignments. He beat out Beene’s then-assistant, Issey Miyake, to design the junior collection, Beene Bazaar. Two years later, Baron Nicolas de Gunzburg from Vogue reviewed Vollbracht’s work and indicated he was unimpressed, so he was fired. Vollbracht was hired right away by Geraldine Stutz, who built Henri Bendel into a retail force with the introduction of its boutique shopping concept, and as an illustrator he learned quickly by tracing the work of Kenneth Paul Bloch in WWD.

Within a couple of years, he was recruited by Bloomingdale’s, which paid a lot more money — about $500 a sketch — in 1975. There, he drew portraits of Calvin Klein, Ralph Lauren and Jean Muir for store windows and, through an inadvertent printing error, became famous. Vollbracht sketched a woman’s face in partial profile — only the features are visible — for a new white shopping bag, nine million of which were printed before anyone realized they had done so without including the Bloomingdale’s name. Yet, they became instantly recognizable throughout the streets of New York, and eventually the world, as a status symbol driven by the sheer size of force of the retailer.

“My 15 minutes of fame as a really famous designer was a long one,” Vollbracht said.

With no funding, he started his own collection in 1978. His first show, with an elaborate theme called “The Lady in the Tiger,” was a huge success, landing in Bergdorf Goodman. His second collection earned a Coty Award and by the Eighties, Vollbracht became a household fashion name. In 1981, he guest-starred as himself on an episode of “Hart to Hart” about a fashion designer suspected of murdering his models, and then appeared on “Paper Dolls” with Lloyd Bridges.

The extra “e” in his name was an affectation of childhood. “I added it when I was 13 to make my father really upset,” Vollbracht said. “But after my business failed, I went to see a psychic and she told me to get rid of it because it was messing up my numerology.”

The collection lasted seven years, after which Vollbracht returned to illustration and art, sketching style icons from designers such as Carolina Herrera, Cathy Hardwick and Mary McFadden to celebrities like Brooke Shields, Elizabeth Taylor and Joan Crawford, who was a drinking buddy. Those years are chronicled in a book he published in 1985 called “Nothing Sacred,” which was reissued by Rizzoli in 2000 when Parsons put on an exhibition of his work.

Before showing his fall eveningwear collection in 1980, Vollbracht told 25 of New York’s highest paid models at that time, “Give me artificial. I don’t want anything real.” Later, when model Carmen Kaplan sashayed through the backstage chaos in billowing beaded black silk, Vollbracht recalled the hush that descended before all the other girls broke out in applause. “I thought, ‘Oh, baby, that’s fashion.”

Vollbracht liked to say that he looked at the world in cinematic frames like director George Stevens of “Giant” and “A Place in the Sun” fame. The early years of his career presented their own snapshots or series of apprenticeships, as he liked to say. He said his stint working for the exacting Beene was “pre-med.” And his tutelage with Brooks, whom Vollbracht pegged as his most extravagantly creative mentor, he learned to be undisciplined and to experiment.

He also captured snapshots of long-forgotten Seventh Avenue days. Geraldine Stutz once tried on Jean Muir dresses to sketch, “sitting in her office with her feet up, toes wrapped, having a pedicure like Judy Garland in ‘The Wizard of Oz.’” All the while, making decisions, giving orders and unintentionally clueing in Vollbracht “to what power is,” he said.

Crawford was another sort of teacher and patron saint. Vollbracht kept a portrait of her in his showroom in the Eighties. He visited her frequently during the last three years of her life. “There was the American dream. She was one tough army sergeant. She was Miss Havisham without the cobwebs, someone who made it and relentlessly had to coil back,” Vollbracht told WWD. “Imagine three years with Joan Crawford. Between the two of us, we drank enough vodka to sink a ship.”

Having once watched Elizabeth Taylor primp before escorting her to a Roseland Ballroom event, Vollbracht described the experience of seeing her apply mascara as “the thrill of a lifetime. Suddenly, it was ‘Butterfield 8.’” As for Garbo, she was the only person to make your heart stop, from the designer’s point of view. And while on the dole early in his career, he borrowed a tuxedo to sneak into the Winter Garden to catch Marlene Dietrich performing before an usher whisked him from the balcony. Referring to a drawing of his of the Duchess of Windsor holding a Coca Cola bottle, Unger said Vollbracht told her, “I think of them as two iconic figures.”

A flaneur while living in New York, Vollbracht called it “the most extraordinary city. One minute it’s Calcutta, the next Paris.”

“I take from everywhere, from everyone, whether it’s a Claude Colbert movie or National Geographic. I can make a Balenciaga coat line for line. Why not? Macy’s did it.”

Like Norrell, he studied garments from the inside-out, amassing closets of clothing from friends to get a better grasp of construction. Referring to the fashion revolution that he anticipated in 1980, Vollbracht said, “We’re going to burn the blazer. Change the whole system. We can’t keep putting pockets on rear ends, or stacking box shapes.”

Vollbracht was also ahead of the fashion pack with upcycling. He designed one of Unger’s favorite coats — repurposing a rug by reembroidering it and bounding it with leather. Andy by 1980, he was already into thrifting his unofficial uniform — a white-collared Brooks Brothers shirt, a pair of khakis and black tennis shoes. He also anticipated the end of the power suit and the casualization of America decades before it set in, the designer said, “Lives are too complicated. The rich travel, and they like to pack like the poor.”

During his tenure, Vollbracht tried to breathe some life into the Blass label by creating flirtier pieces for younger shoppers without alienating the brand’s core Old-Guard customers. With Vollbracht at the helm, he suited up such notables as former First Lady Laura Bush, Jessica Lange and Janet Jackson. Prabal Gurung was among the staff at that time, too.

In 2007, Vollbracht exited Bill Blass after months of stormy relations with management. At the time of his departure, executives at Bill Blass Ltd.’s then parent company NexCen Brands said his creative interest had led him down a different path. After returning to Florida, he focused on fine art painting and had representation in art galleries. Vollbracht also had a two-year stretch pitching a more affordable line on HSN and occasionally stepping in for Apfel including for her HSN debut, when a broken hip kept her sidelined. “He was such a good friend and so talented. He made clothes for oversized women on HSN. It did very well. He made beautiful things,” Apfel said.

“He understood fashion, what he didn’t like was business. He loved fashion. He hated the fashion business. In Europe, your freedom of expression was always more applauded and supported. Being an American fashion designer, until recently, was more about the dollar, building a business, appealing to the stores,” Unger said. “Michael didn’t fit that mode, nor did he want to.

She added, “His art was so much a part of his fashion. Michael always did things in a different way, and his art always started everything. He could paint a print in two seconds that would take somebody else forever. He was his own kind of Matisse and Picasso all in one.”

In addition to his own book, “Nothing’s Sacred: Cartoons and Comments,” Vollbracht worked on illustrations for “Iris Apfel: An Accidental Icon” and “Norell: Master of American Fashion,” by Banks and Doria De la Chapelle. At the time of his death, Vollbracht was at work on a book of his illustrations, including Ginger Rogers and other film stars with the art director Steven Cohen. Vollbracht said of his theatrical leanings, “I tend to be melodramatic, I like too many violins. But if I had a normal life, I’d be bored to tears.”

Vollbracht is survived by a sister Michelle.

Unger, chairman of the board at The New School’s Parsons School of Design, said she hopes to organize a memorial and retrospective of Vollbracht’s life there.