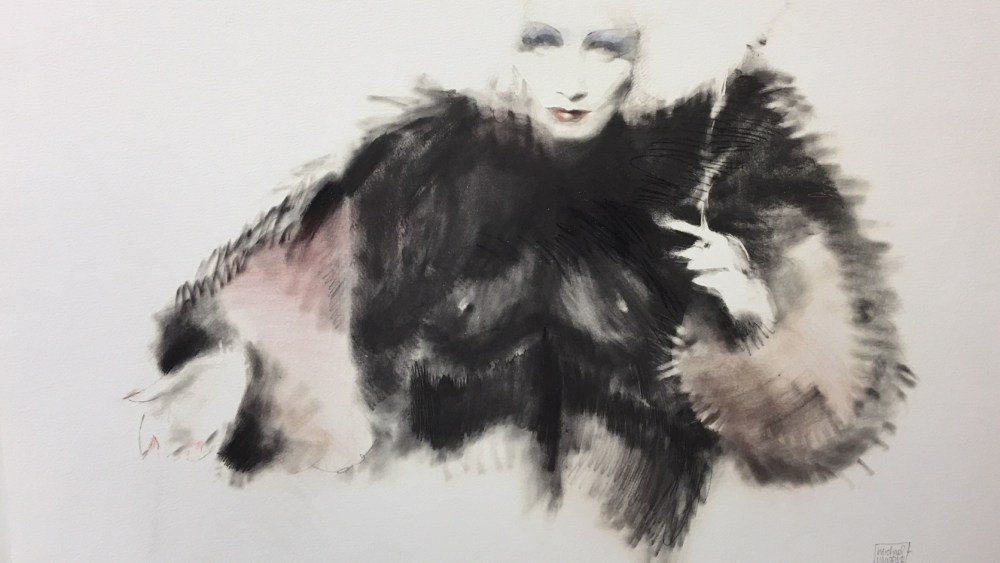 Michael Vollbracht retreated from the New York fashion scene in the Aughts, but he continued to build his portfolio with paintings, writing, sketches and other artwork.

Drafts for books, plays, photographs, sketches, paintings and mixed-media art are part of the trove of keepsakes his niece Tracy Stanley has been trying to piece together. As the executor of his estate, she has been on a fact-finding mission, when she isn’t working as a nurse and pharmaceutical rep in Kansas City. Adding to the challenge is the fact that she hadn’t seen her uncle, who died in June at the age of 70, in more than 20 years.

“This is just another way for me to understand my uncle better. When I went to Safety Harbor [Fla.], so many people have so many stories. It just really paints a picture of who he was,” she said. “I’ve got letters and plays that he wrote [including one starring him and Liz Taylor]. He started two or three different books. He was just a completely talented individual beyond measure. Even his house was overwhelming. He had painted every wall and every ceiling in this design. He would have major pieces of artwork mixed in with thrift-store plates. It took us two or three days to look at one certain wall and to understand, ‘This is an art project. He’s made this wall look like a hallway.’ It’s crazy. It wasn’t an accident.”

A retrospective of his work is planned for Nov. 19, on what would have been his 71st birthday, at the Syd Entel Galleries and Susan Benjamin Glass in Safety Harbor. “Remembering Michael Vollbracht, 1947-2018” will be an art show and sale to acknowledge his life, work and legacy as an artist and fashion designer. About 5,000 invitations imprinted with one of Vollbracht’s illustrations and his handwritten description of himself, “Top New York fashion designer; commercial artist; portrait artist; textile pasha; costumer to the stars; producer of fashion follies” were sent out for the Nov. 17 opening night party. Billed as “Remembering Michaele,” a reference to how he liked to spell his own name a long time ago, the event will run through the end of this month.

Most of the rare and vintage pieces to be sold were found in his home “in a big portfolio stashed in a closet and under his bed,” said gallery manager Linda Gagliostro. (Newer more modern paintings have also been found.) A painting of Mia Farrow, mixed-media pieces of Marlene Dietrich and David Hockney, numerous fashion illustrations, sketches, drawings, collages and oil paintings that were featured in his book “Nothing Sacred” are among the 50 or so pieces that will be sold at the gallery.

A Parsons grad, Vollbracht’s fashion career included stops at Geoffrey Beene, Henri Bendel and Donald Brooks before launching his own line in 1979. Later he worked for Bill Blass, succeeding the famed designer in 2003 and leaving in 2007. An accomplished illustrator and artist, Vollbracht worked for Vogue, The New Yorker and Bloomingdale’s. Art was also a thread that extended throughout his life.

Vollbracht staged a number of sales at the gallery over the years for such causes as abused children, pediatric cancer patients and breast cancer ones. Vollbract would drop by the gallery nearly every day, Gagliostro said. “He was so internationally known at one time, but then later in his career he just lived a rather quiet, reclusive life here in Safety Harbor. After HSN, he did more commissioned work like a rendition of Iris Apfel for her book and he collaborated with Jeffery Banks for the Norman Norrell book.”

At the lower end of the scale, unsigned sketches that Vollbracht did for his HSN collection will be around $1,000, pencil sketch portraits will be about $6,000 and large paintings will go up to $25,000. Some works to be sold are unfinished and unsigned, but photographs and other signs of authenticity indicate “There is no mistaking his style,” Gagliostro said.

Those who browse the retrospective in the gallery — as opposed to online — will find a “very flamboyant, sparkly jacket” covered with cat motifs Vollbracht designed for Elizabeth Taylor, a longtime client, and a dress for Oprah Winfrey. The clothing is not being sold.

Meanwhile, Stanley is compiling his archives as best she can. A Georgia printer, whom Vollbracht worked with for years, has all of his work digitalized, as well as many personal photographs, according to Stanley. His two-bedroom house in Safety Harbor is expected to go on the market in the next three or four months, but the asking price has been determined.