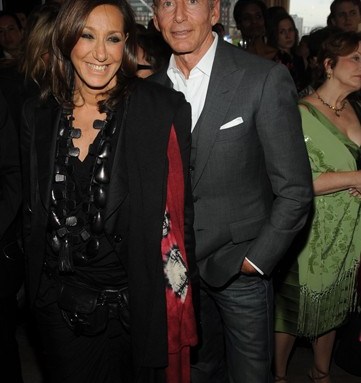 The United Nations hardly knew what hit it on Tuesday night when a parade of bold-faced names descended for a bash to celebrate Ross Bleckner’s official appointment as a goodwill ambassador for the UN Commission on Drugs and Crime, sponsored by Moschino and Egyptian billionaire Shafik Gabr.

Even Secretary General Ban-Ki Moon seemed starstruck, especially by the presence of Nicholas Cage. “As soon as I saw you, I thought ‘My daughters would have loved an autograph,'” said Moon, who went on to explain how Cage’s action movies actually tackle important international issues. ” ‘The Rock’ is really about the danger of chemical weapons,” said Moon, to an amused crowd, including Bleckner’s friends like Donna Karan, Calvin Klein and Alec Baldwin as well as Famke Janssen, Rachel Roy, CeCe Cord and Kat DeLuna.

After the speeches, Bleckner was presented with a huge cake and serenaded with “Happy Birthday” to celebrate his 60th.

“Aw, you didn’t have to mention the year,” laughed the artist when it was announced.

Meanwhile, Calvin’s daughter Marci Klein was suffering from a case of mistaken identity. First, the leggy “30 Rock” producer was asked by guests if she was Baldwin’s new girlfriend. Then, a woman asked if she was designer Karan, who was in fact standing right next to her. “I’m sorry, I can’t stop laughing,” said the blond. “She thought I was Donna.”

But the real attraction was the paintings created by child soldiers and abducted girls in northern Uganda under Bleckner’s tutelage. Priced at $500 each, they were selling briskly and were expected to raise $250,000 for the fight against human trafficking.

“This has touched a nerve and [Bleckner’s] heart at the same time,” said Calvin Klein, who himself has traveled to Africa several times and admires the actions of philanthropists like Oprah. “I’ve been thinking what can be done a lot…for $70,000 we could build a school there. I want to do whatever I can.”

On a lighter note, everyone was enjoying the UN’s spectacular, massive balcony which boasted views of both the Manhattan skyline and Queens. “How about that terrace?” said Klein. “I’ve never seen Queens look so good.”

Afterwards, guests including Karan, Georgette Mosbacher and Eleonore Kennedy trooped over to Megu for a dinner hosted by Gabr, where Bleckner was serenaded with “Happy Birthday” for a second time.