This year’s event, dubbed “Birds of Paradise,” puts the spotlight on fringe films. 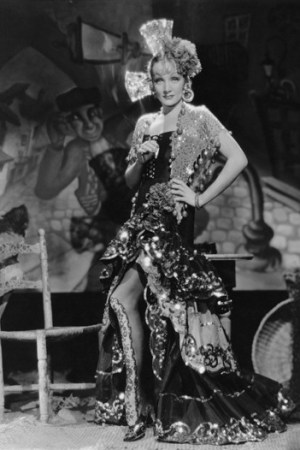 When you think of fashion in film, a slide show of images most likely comes to mind. There’s Rita Hayworth’s black satin stunner in “Gilda.” Joan Crawford in all her ruffled, puff-sleeved “Letty Lynton” glory. Jodie Foster’s floppy hat in “Taxi Driver,” Faye Dunaway’s “Bonnie and Clyde” beret or even the pilings of lace and sequins à la “Desperately Seeking Susan.” Everyone seems to have covered cinematic costume design six ways from Sunday.

Yet the Fashion in Film Festival, which opens tonight and runs through April 24 at New York’s Museum of the Moving Image, has found a way to cast the subject in a different light. This year’s event, dubbed “Birds of Paradise,” puts the spotlight on fringe films, offering up a double serving of both early Hollywood and experimental movies from the Fifties, Sixties and Seventies. But rather than the de rigueur Adrian and Edith Head, this festival, organized by Marketa Uhlirova, focuses on names like Steven Arnold (Salvador Dalí model and artist) and Mitchell Leisen. The latter dressed Gloria Swanson in the 1919 Cecil B. DeMille epic “Male and Female” and is responsible for the actress’ sumptuous headdress and gown — so heavy that she needed two people to help her get around the set — in the film’s famous fantasy sequence. Swanson’s accessory du jour here: a live lion.

As for Arnold, a trifecta of his film shorts will be featured on April 22, which is dedicated to his surreal gender-bending oeuvre, including the visually stunning “The Liberation of Mannique Mechanique” (1967), with lavish costumes designed by the filmmaker himself. Meanwhile, the festival also highlights the work of other underground directors, such as Ron Rice (known for his dreamy, multilayer images), Jack Smith (pioneer of camp) and Kenneth Anger (who wrote the scandal-laden “Hollywood Babylon”).

So how does “Birds of Paradise” make the link between such art flicks and the silent and early talkie era? “The focus is on visual spectacle,” explains David Schwartz, the museum’s chief curator. “In this context you’re looking at what’s happening outside of the story and you really see the sensual pleasure of cinema. That’s always been true of avant-garde films, where narrative is not as important.” In other words, it’s about fashion used as special effect, the show more than the tell (explosives and 3-D be damned).

“There’s a film historian named Tom Gunning,” Schwartz continues, “who came up with this idea called cinema of attractions that early films were more concerned with giving you the experience of visual wonder — which is what fashion is all about, of course. If you talk to costume designers today, they’ll say they were trying to express the character. Not that they don’t want you to notice the costumes, but in the films we’re showing, you can take pleasure in the costumes themselves.”

And sometimes knowing the backstory helps with the festival’s two-prong approach. Thus on April 16 there’s a double billing of Anger’s “Inauguration of the Pleasure Dome,” his 1954 hedonistic film inspired by a masquerade party he attended the year prior, followed by Josef von Sternberg’s “The Devil Is a Woman,” from 1935, starring lady-is-a-vamp Marlene Dietrich. “Anger’s familiar with those kinds of films,” says Schwartz. “He focused on decor and fabric and textures and the like. If you really look closely at his writings about von Sternberg, you can see the connection with ‘The Devil Is a Woman.’ Von Sternberg is really fetishistic about his backgrounds.” The Los Angeles-based Anger, now in his 80s, was actually the one who suggested Uhlirova pair his flick with one by either von Sternberg or DeMille.

“It’s great to look at costume design and film in this way,” says Liz Goldwyn, filmmaker and artist (and granddaughter of Samuel Goldwyn), who’s working on an unnamed collaboration with the Fashion in Film Festival. “It’s a whole different take — that’s what’s cool about this particular programming. And there are films here, like those by Jack Smith, that you can’t Netflix like you can others.” Indeed, there’s only one copy in the world of Alexandre Volkoff’s 1928 movie “Secrets of the Orient,” which almost didn’t make it to the event because of the recent earthquake in Japan. It arrived only two days ago. “We also have a rare print of ‘Golden Butterfly’ by Michael Curtiz, who directed ‘Casablanca,’” adds Schwartz. “It’s a silent of his before he immigrated to the U.S.”

The “Birds of Paradise” roster may not scream “fashion films,” but there’s one flick in particular that will likely resonate with the industry set: William Dieterle’s “Fashions of 1934,” which closes the festival and includes some dazzling Busby Berkeley numbers. It features Bette Davis — in that blink-and-you-miss-it part of her career when she’s working a blonde bombshell-Jean Harlow look — as New York fashion designer Lynn Mason, who’s making cheap copies of Paris designs. That is, until she discovers that one of the top couturiers gets his own design ideas by knocking off illustrations from old costume books.