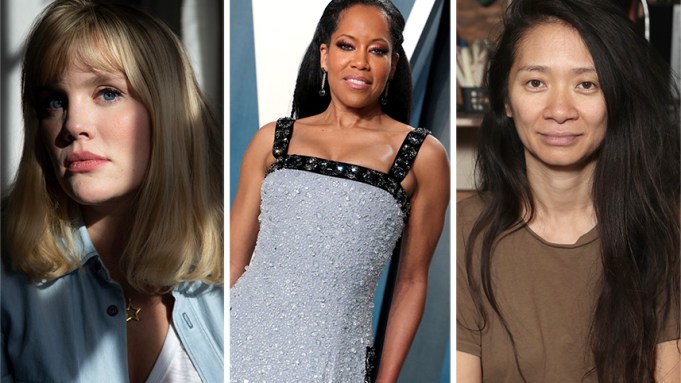 Only one woman has ever taken home the Golden Globe award for best director: Barbra Streisand, who won in 1984 for her film “Yentl,” in which she also stars. 2021 might just be the year that another female director joins Streisand in the winners club. This year’s list of nominees already marked an important milestone in the category; for the first time, more than one woman is up for the prize. Here’s a look at the three woman nominated for the Golden Globe for best director and their films making waves this awards season.

Director Chloé Zhao, 38, premiered her third feature film “Nomadland” — a 2021 awards season frontrunner across categories — at the Venice Film Festival, where it won the festival’s top honor, the Golden Lion award. It’s a promising sign for what might be in store for the film: it picked up four Golden Globe nominations, including for best drama motion picture, best screenplay, best director and best actress for lead Frances McDormand, who stars as a transient seasonal worker.

Zhao’s previous film, “The Rider,” marked a major breakthrough moment for the buzzy director, who won the Gotham award that year for best feature. But her next film marks a departure from the quiet, poignant storytelling we’ve come to expect from her — the 38-year-old Chinese director is currently in post-production for forthcoming Marvel superhero film “Eternals.”

Chances are you’ve already seen Fennell onscreen. The 35-year-old Brit appeared in “Anna Karenina” and “The Danish Girl,” and more recently starred as Camilla Parker Bowles in seasons three and four of “The Crown.” Fennell also served as the head writer for season two of “Killing Eve” — Phoebe Waller-Bridge is a friend — and was nominated for a primetime Emmy award for outstanding writing for her work on the series.

Regina King, having already established herself as one of the best actresses working today, is making her mark behind the camera as well for her feature film directorial debut “One Night in Miami.” Her Golden Globe nomination for best director makes her the second Black woman to earn a nod in the category. (Ava DuVernay was nominated for “Selma” in 2014.) King directed “One Night in Miami” from a screenplay by Kemp Powers with an ensemble cast stepping into character as some of the most influential names in U.S. culture: Malcolm X, Muhammad Ali, Sam Cooke and Jim Brown. As the name suggests, the film takes place over the course of one night, and is set mostly inside one hotel room; critics have praised King’s approach to the material and ability to direct her actors to career-best performances. (Leslie Odom Jr., who plays Cooke in the film, was nominated for the Golden Globe award for best supporting actor.)

King’s previous accolades include the Golden Globe and Academy Award for best supporting actress in 2019 for “If Beale Street Could Talk,” and most recently she picked up the Emmy award for best leading actress in a limited series for “Watchman.” King is set to return to viewer’s screens soon; she recently completed filming for Western “The Harder They Fall” opposite Idris Elba and LaKeith Stanfield.