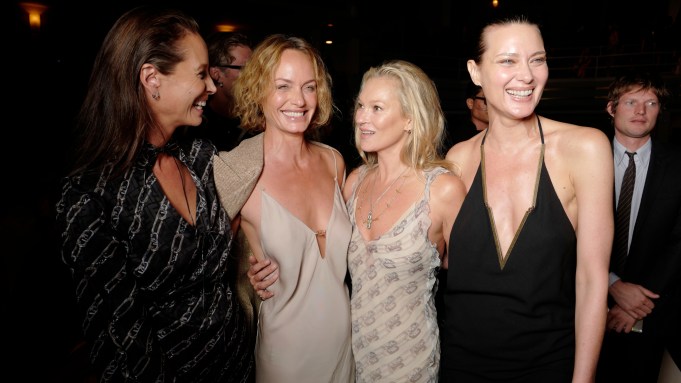 Does it get more major than this?

Friday was technically the first day of New York Fashion Week and already, it’s hard to imagine a more show-stopping front row than the turn out for Fendi’s.

Held at Hammerstein Ballroom in midtown Manhattan, the Friday night show — a collaboration between Kim Jones and Marc Jacobs — brought out the designers’ many famous friends. Kim Kardashian is often, easily, the biggest celebrity name to sit front row at any show she attends, but her arrival inside the venue was a blip on the radar compared to who came next: Kate Moss, Christy Turlington Burns, Amber Valetta and Shalom Harlow — the Supers, minus a few — were all in attendance, cheering on Jones and Jacobs. Moss played proud mom at a recital, taking videos of her daughter Lila Moss who opened the show. And when fellow super Linda Evangelista was brought out during the final bow, the whole ballroom, Supers included, went wild.

The front rows have been back in a big way this NYFW, with the few shows to have taken place already drawing VIP turnout. Janet Jackson was at Christian Siriano, Doja Cat took in Bronx and Banco, and there even were some familiar faces walking Collina Strada: Ella Emhoff, Hari Nef and Jemima Kirke all were in the show.