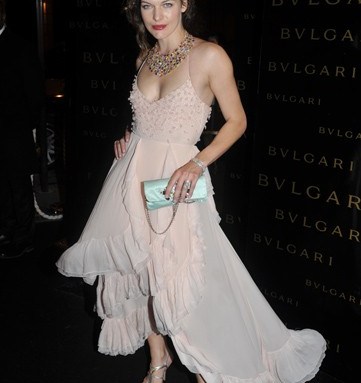 “Is this the Balenciaga party?” asked Emma Watson, surrounded by her girlfriends at Le Baron, where said party was in full swing Tuesday night in Paris. Perhaps sitting at fashion shows for the last three weeks is wearing down the young actress.

Meanwhile, Zoe Kravitz hung out in a corner with a group of pals while Natalia Vodianova stayed close to her husband, Justin Portman, who was busy showing friends a thumbnail-size photo of the couple’s very blond sons.

Over at the opening of Bulgari’s new store on the Avenue Georges V, actor Alain Delon was fighting off the press. “You can’t all talk to me at the same time,” he shouted as the paparazzi swarmed. Crushed into a corner by the crowd and nursing an injured left arm, Delon waved off reporters as he greeted members of the Bulgari clan and Francesco Trapani, the Roman jeweler’s chief executive. “I’m not doing much these days,” said Delon. “I overextended my arm and have been enjoying some rest.”

Across the room, another French cinema legend, Anouk Aimée, quietly inspected Bulgari’s baubles. “I remember loving Bulgari jewelry so much in the Sixties,” she recalled. “I used to go to their store in Rome when I was working with Fellini.”

Also mingling in the crowd were recent Paris transplant Margherita Missoni and Astrid Muñoz, who have been on something of a nightlife marathon as of late. “In Paris the party never stops,” said Muñoz.