Fetty Wap on Taylor Swift, Chris Brown and Coming to Terms With ‘The Artist Fetty Wap’ 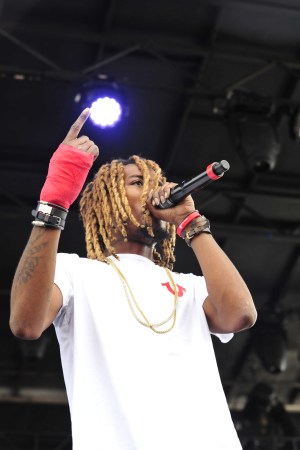 Fetty Wap performed Sunday at the Billboard Hot 100 Festival at the Jones Beach Theater. It was the latest highlight in what’s been a blockbuster year for rap’s hottest star of the moment — the 25 year-old, who is most well-known for his hit “Trap Queen,” is the first artist to have his first four singles chart in Billboard’s top 10 Hot Rap Songs. He’s also performed with Taylor Swift and is now on the road with Chris Brown. And all this without even releasing a full-length album, which he’ll finally do on Sept. 25.

WWD: You’re playing shows all over the country day after day — do you have specific preshow rituals?

Fetty Wap: Not really. Before we go on stage I always tell my brothers I love them — another show, another time, another stage, new people. We go and do what we do best. We give each other a hug, we walk out and it’s go time. I just like to have fun. Especially when I’m on stage, I try not to bore people. I’m real active.

WWD: This has been a big week for you: you are the first artist to have their first four singles charting in the top 10. How does that feel?

FW: It feels different. To just be coming out with my first four songs, and all of them are in the top 10, it kinda feels fake. Like somebody made that up. It just feels good and I feel blessed. I’m honored that people actually like my music that much to have all of them consistently there.

WWD: Has your life changed drastically in the past year?

FW: Not really. It depends on how you look at it. Fame and all that doesn’t really attract me. I’m still probably the only one out of the whole tour that is just not interested in it. I always appreciate everything. I thank Chris Brown every day. Every time I see him I thank him for having me on his tour, even when I’m about to start my set, I thank him. And just everybody I encounter. There’s never a bad vibe with me. I’m just regular, I’m just someone you could come talk to. I’m just cool, you know what I’m saying? I just be chilling, and I keep it regular. I don’t really like the fashion stuff too much either. There are too many rules to that stuff. The whole fashion police and all that, I don’t like it. People say I got my own style but I just stick to my thing.

WWD: You’re on tour with Chris Brown and you joined Taylor Swift on stage during her “1989” tour earlier this summer. What’s it been like to work with these artists?

FW: It’s fun. At first I just thought it was going to be just me by myself, and then we were doing this thing where he was bringing me up at the end of his set, and he just made me feel welcome. It wasn’t like I was an outcast, it was like, “You’re a part of the music industry and this is what you do now.” It kind of made me feel more comfortable in the whole Fetty Wap era in the aspect of being who I am as an artist. People are saying, “Oh, it’s just a song” and now I’m more comfortable saying “I’m the artist Fetty Wap.” So he actually did that, and I feel more comfortable. Taylor Swift was definitely different. I wasn’t expecting that…like the way we were going to do it a cappella and have everybody singing with us all. She’s so business-oriented, you would think she’s not an artist, that she runs the art, but then when she becomes an artist, she’s like the best artist to do it. It was kind of like me watching her as a fan, but also me watching her as an artist, and her watching as a fan and her watching as an artist, it just made it more…I don’t know the word for it, but I felt like it was bigger than what they made it. It was just crazy.

FW: I make on-the-spot music. And most people don’t understand what I mean by that. I’m not the artist to take a break and listen to four different beats and write four different songs. I can write four different songs without a beat in my head. So it’s like, whenever I start thinking, I start writing. So I have to find a beat to match what I’m writing to. That’s how I get the Fetty Wap sound. Most people write to the beat, and that’s when you get the gloom or you get the happiness. My music is just how I’m feeling. I make talk about being on a yacht and the water is green but I will convert it into talking about money or something like that. Whatever, it just has to sound good. I try to be myself and stay who I am. I’m not trying to jump in other people’s lanes. It’s just natural with me — I’m not, like, an album writer. When we go to the studio, I can write you 20 songs in the studio, but I can’t do it periodically. One day maybe I can’t write a song but the next I can write 15. It just feels cool being Fetty Wap.

WWD: What can you tell us about your upcoming debut album?

FW: It’s going to be fun. I’m not telling no stories on the album, I try and stay in my lane. It’s just me being the artist that I am, I just put out fun energetic music that people like to listen to. You turn on the radio and just drive far, or whatever it may be. That early morning start to work — I got that kind of music. There’s always going to be a smile on your face when you hear my music.