AmFAR's Cinema Against AIDS benefit at Cannes brought out the dazzling dresses missing from the red carpet all week and the stars to wear them. 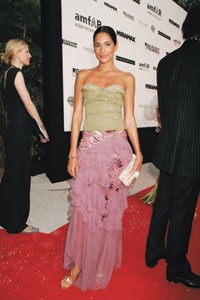 CANNES — There’s something to be said for saving the best ’til last. AmfAR’s 12th annual Cinema Against AIDS benefit Thursday night brought out the dazzling dresses that were missing from the red carpet all week and a stable of stars to wear them. Co-host Sharon Stone rallied Penelope Cruz, Salma Hayek, Milla Jovovich, Joely Richardson and Jessica Alba to get glammed up for the gala, held again at Moulin de Mougins. Co-chair Carine Roitfeld brought out the fashion stars — John Galliano, Vanessa Seward and Patrick Demarchelier.

Stone also wrangled a good dinner partner: Fiat heir Lapo Elkann, whose company donated an Alfa Romeo coupe. “I like to think Italians do it better,” he said, referring to the car as well as the midnight blue tuxedo he designed for himself, “Sharon is the picture of a movie star,” he said, “Smart, elegant and funny.”

Benicio Del Toro had similarly kind words for his date, Puerto Rican model Astrid Munoz. “Doesn’t she look fabulous? We’re from the same country,” he bragged. He dwarfed Mary-Kate and Ashley Olsen, who both wore vintage. As the twins convened by a side table with their handler, Mary-Kate revealed she’s on a European whirlwind. “I’ve been traveling around, first London, then Paris, then London, then here, then I go to Madrid tomorrow,” she said, adding, “I barely knew what I was going to wear tonight; I pulled this outfit together about 10 minutes ago.”

Cruz also decided at the last minute what she would wear. “I just got in last night,” she said. “Oh yeah, you made it to our party!” clapped Stone as she went in for an embrace. “And you look so happy, it really shows,” she continued, asking if Cruz would mind being in the home movie she was shooting. Looking on were Marchesa designers Georgina Chapman and Keren Craig, who scored a coup getting their powder blue strapless sheath on Cruz just the day before, though people trampled its train all night. “All I do is step on people’s dresses,” admitted one offender, Mickey Rourke.

As Jovovich squeezed by in a dress of her own design, Cruz pinched her arm. “I heard you’re going to sing tonight!” cried Jovovich. “No, never! I don’t sing, I can’t!” replied Cruz. Jovovich, on the other hand, belted out a rendition of “Big Spender” that got the crowd on its feet. Still, she was no match for co-host Liza Minnelli singing “New York, New York.”

Robert Rodriguez, in his signature stetson, noted, “The [‘Sin City’] cast is taking up two tables. We’ll be the rowdy ones.” True to form, the director played the theme song to “Desperado” with friend Hayek on backup vocals. Meanwhile, his toned-down star, Jessica Alba, explained that her Ralph Lauren look was meant to be reminiscent of Marilyn Monroe. But Stone was the real blonde bombshell in the room, compelling the crowd to donate over $3 million in auction items. “It’s for a good cause, but I like to think it’s because I’m just fabulous,” she purred.

Around midnight, the crowd moved on to Naomi Campbell‘s birthday party at the Palm Beach Casino, but the diva didn’t show until 1:30 a.m. Then it was on to a private yacht, where guests reveled until 8 a.m. “I had to leave,” sighed one tired designer. “But the party was still going strong.”