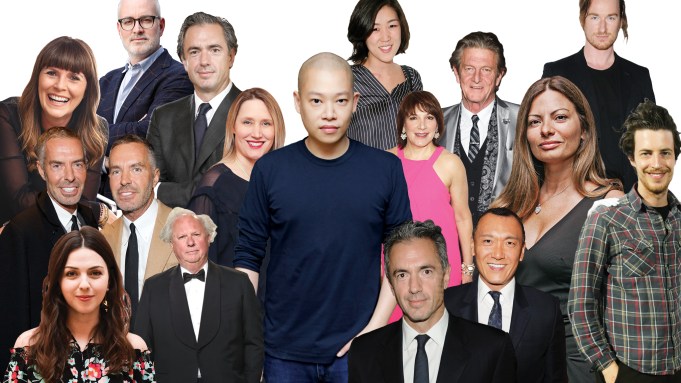 Dean and Dan Caten of Dsquared2
From Willowdale, Toronto; Left at age 16

“There is always a nod to Canada in every collection whether it’s the maple leaf, flag, colors in the designs or even the signature styles of Canadian DNA like denim, worker boots or heavy outerwear for the cold winters. Home will always be inspiration for us.”

“The beauty and peace of Canada’s nature inspires me. The majority of ideas I get for my collections come from a walk in the Lake of the Woods or the mountains of Vancouver.”

“Canadians say they are sorry a lot. If you go online and Google Canadians saying ‘sorry,’ it’s like a big joke. For some reason, we’re always apologizing for things we never did. I have no idea what that has to do with my designs, but sorry.”

“You’ll notice if someone’s Canadian ’cause whenever they go back home they Instagram Story ketchup chips. It’s like a first rite of passage thing you do.”

“I’m really proud of being Canadian and I don’t plan to leave it, but if this were a dinner party game where a person told me I had live somewhere else, you will find me in a small town in Italy.“

Daniel Lalonde, president and ceo of SMCP
From Cornwall, Ontario; Left at age 27

“Canada’s a very open environment — there’s openness to other cultures, other ways of doing things. I think it’s had some type of impact on my career after.”

“Most people think I’m either from California or New York for some reason. Being Canadian has made me more open to adventure and resilient, which is the backbone for any successful entrepreneur.”

Laura Kim of Monse
From Calgary, Alberta; Left at age 18

“Canadians are usually very chill. I like to stay relaxed in a crisis and resolve it calmly, but my Korean side usually comes out in the end.”

Jason Wu
From Vancouver, British Columbia; Moved there at age 10

Joe Zee, editor in chief of Yahoo Style
From Toronto; Moved to New York in 1990 when he was 21

What’s the coolest thing about being from Canada?

“You get to say you’re from the same place as Justin Trudeau and Drake.”

What’s the biggest stereotype about Canada?

“My parents had me convinced that New York City was a scary, dangerous place that I shouldn’t even think of visiting, much less move to. My vision of New York City was pretty much based on the 1970 film ‘The Out-of-Towners,’ which featured Sandy Duncan and Jack Lemmon coming to New York from Ohio and getting mugged, losing their hotel reservation and having to sleep in Central Park.”

Graydon Carter, editor in chief of Vanity Fair
From Ottawa; Came to New York in 1978 to work at Time

What’s the biggest stereotype about Canada?

“That we are terrific in bed.”

Have you ever threatened to move back to Canada?

What would it take for you to actually do it?

Nick Haramis, editor in chief of Interview Magazine
From a small mill town in Ontario called Cornwall (claim to fame: hometown of Ryan Gosling); Moved to New York the morning after he graduated from college

What was the biggest misconception you had about the U.S. growing up?

“My impressions of New York, specifically, came from reading J.D. Salinger’s ‘The Catcher in the Rye’ and Bret Easton Ellis’ ‘American Psycho.’ When I moved here, I realized that there are far fewer phonies than I was warned about, and that the narcissists are for the most part quite harmless.”

Is there a Canadian mafia in New York media?

“It’s not like we get together for weekly Celine Dion listening parties, but….”

Troy Young, president of Hearst Magazines
From Regina, Saskatchewan; First left for boarding school at 14, left for good at 30

“Being Canadian shapes everything. You learn to be resourceful. Plus, Americans like Canadians; we are funny and nonthreatening.”

“Canadians are scrappier when it comes to business. There is a very strong entrepreneurial spirit and some of the greatest artists across industries, from Céline Dion, Paul Haggis and Lorne Michaels to Leonard Cohen, Jim Carey and Samantha Bee — are from Canada. The culture respects, honors and celebrates creativity in a way that isn’t supported in many other countries.”

What do you miss most?

“The real Canadian bacon! Seriously, New Yorkers have no idea what they’re missing when they eat the weird ham that’s billed as ‘Canadian bacon’ here.”