The Screen Actors Guild Awards brought few surprises, but there were plenty of fashion highlights ... Manhattan soirees of song and flowers. 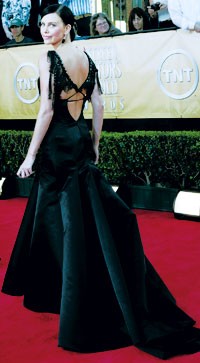 LOS ANGELES — Given all the statuettes that already have been doled out during the shortened film-awards season, the 11th Annual Screen Actors Guild Awards on Saturday brought few surprises. But there were plenty of fashion highlights. Cate Blanchett was the first woman to wear a gown from Valentino’s spring 2005 couture collection, while Charlize Theron beat everyone to the punch in the first Armani Privé gown to hit the red carpet since his couture collection was launched last month. For her last “Sex and the City” hurrah, Sarah Jessica Parker chose a Stefano Pilati for Yves Saint Laurent frock, while Hilary Swank mined vintage Versace. One best-actress nominee who isn’t getting caught up in gown mania is Imelda Staunton. The star of “Vera Drake” wore “a skirt and top from my wardrobe. I just get dressed and get out there and have a good time,” she said, adding that London costume designer John Bright is making her Oscar gown. In fact, Staunton, who has been acting for 28 years, said her life hasn’t changed much since her nomination. “I still seem to be doing all my own cooking and shopping and washing,” she shrugged. “Maria Full of Grace” nominee Catalina Sandino Moreno has found herself in the same boat. “The only thing that’s changed for me is that I talk to more reporters now,” she said.