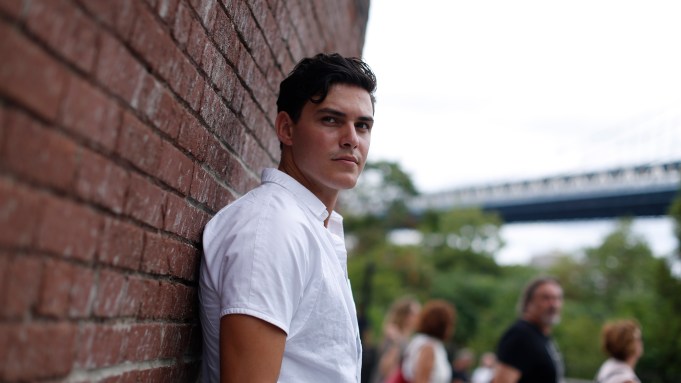 Tor Miller is 22, stands at 6-foot-3, and dresses with an affinity for James Dean, Marlon Brando and Elvis Presley — a look the breakout musician promises is innate. “My father is 76, so we definitely watched a lot of older movies,” he said. The influence has crossed into his sound, released today on his debut album “American English.” “I wanted everything to have a cinematic feel to it,” he says.

Miller began to take music seriously once his family moved from New York into New Jersey when he was a teenager, so his mother could have stables for training horses. “I started writing a lot of music when we moved, just because I had a lot of time on my hands and not that many friends,” he says. “That’s kind of what I did — all the time. That and working on the farm.”

He occupied his commute to school with tracks from David Bowie, Elton John and Fleetwood Mac, which began to take root. “The Seventies and that realm was always ingrained in me, and it sounded right in my ear,” he says. “And I definitely took a lot of inspiration from stories and books and poetry and whatnot…Raymond Chandler, who did all this pulpy detective noir stuff. That interested me a lot, Tom Waits, too, what he was doing. And ‘City of Thieves’ by David Benioff. From a lyrical perspective, that is always really interesting to me — I’m always trying to write stories chronologically.”

Miller studied music at New York University for a few years and slowly amassed gigs around the city. “I had a residency as a pianist at the Slipper Room, and a couple of places on the Lower East Side,” he says. “And we just started inviting everyone.” He caught the attention of Glassnote Records, which produces acts of similar throwback affinity like Mumford & Sons and Daughter.

Describing his debut, Miller says he’s still reaching back. “I guess this first record and the singles are my attempt at re-creating some of the Seventies records,” he says. “It’s like piano-based Seventies-inspired storytelling.”