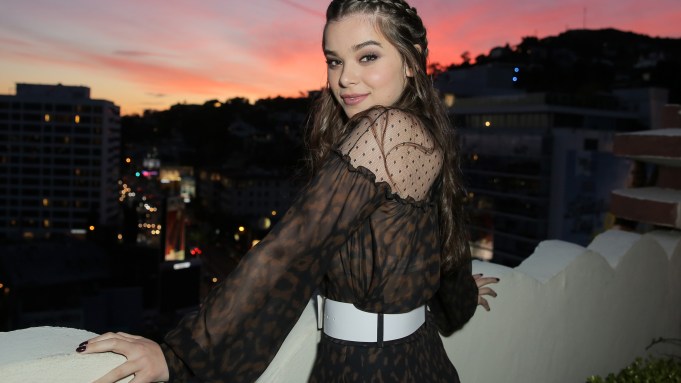 Hailee Steinfeld celebrated her debut as cover girl and guest editor for the sixth edition of harper by Harper’s Bazaar Friday at the aptly named Sunset Tower Hotel. With the pink-and-purple-streaked sky on the terrace providing the perfect backdrop, Steinfeld caught up with girlfriends Bailee Madison, Joey King and Kiernan Shipka and posed for photos with Bazaar’s Laura Brown. In between the flurry of activity, the 19-year-old singer and actress chatted with WWD about her new music, her respect for fashion designers and being in Taylor Swift’s girl squad.

WWD: What was the most memorable moment of the shoot for you?
Hailee Steinfeld: I got to bring my dream team for hair and makeup, Bobby Eliot and Stephen Sollitto. They have been with me for so long. Every time I’m with them, I’m reminded how lucky I am to get to do what I do.

WWD: You’ve just released your first EP, “Haiz.” What’s your reaction to the response it’s received?
H.S.: It’s been very overwhelming how positive everything has been. My fans have been so genuinely supportive having been with me since my movies and crossing over with me to music. Music has always been a passion and it’s always been a part of the plan to record it and put it out into the world, but I never could have planned the way it’s gone. It’s been so seamless and surreal.

WWD: We’re digging the second single “Rock Bottom” featuring DNCE. Where did the inspiration come from?
H.S.: The song was written by Julia Michaels and Justin Tranter. “Rock Bottom” is not a love song, it’s not a breakup song; it’s that perfect in-between of that type of relationship I feel everyone’s been in, where you love a person so much, but they drive you absolutely insane and you let them because you love them. And that’s what keeps you coming back for more.

WWD: Do you find it difficult to balance your acting and music career?
H.S.: It’s not easy. It can be frustrating when it comes to picking one, but it’s been done, so I will continue to do both and do whatever I can to make it work. Right now, music is my main focus and it’s where every part of me is at. So I’m working on my album, I’ll be going on tour this summer with Meghan Trainor, and we’ll see what happens.

WWD: Has your pal Taylor Swift given you any advice on singing?
H.S.: Watching her, I’ve learned so much and that is where the best advice comes from. Not necessarily her telling me or giving me advice.

WWD: What’s it like to be a part of her girl squad?
H.S.: It’s funny because I think people have a pre-conceived notion as to how they think that is. I wish I could see her a lot more than I actually do. But it’s really great knowing people who know your lifestyle and go through the same things as you because not everyone understands it. I mean, I’m still learning it and I don’t understand it half the time. So it’s nice to have a solid group of people who do get it.

WWD: Have you started researching the direction of your tour wardrobe?
H.S.: Being on stage, there’s so much you can play around with that you can’t necessarily get away with on a red carpet. But I’m really going to try to go comfortable because at the end of the day that’s what really matters, and I tend to forget that when I’m wearing really high, high heels.

WWD: You’ve been embraced by the fashion world for quite a while; how does that feel?
H.S.: When I was 14 years old I was asked to do the Miu Miu campaign; it all started when I was invited to their fashion show in Paris. I remember my appreciation for fashion, designers, models and everyone behind a brand, became so much higher knowing how much work goes into a show that lasts for less than five minutes. I really feel like the whole Prada and Miu Miu team is family. They introduced me to the real world of fashion, and I’m so appreciative of that.