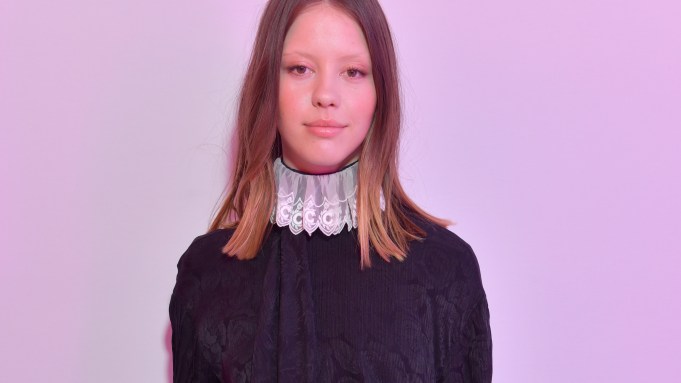 SUPPORTING ROLES: It was all sisterhood in the front row at the Chloé show. Looking forward to seeing Juliette Binoche, Mia Goth kept her seat warm while she waited for the French actress’ arrival. The two star together in “High Life,” the English film debut from producer Claire Denis, a sci-fi thriller filmed in Germany, that comes out in April.

When Binoche finally managed to break through the snarl of traffic that formed around her, the two embraced warmly before taking to their seats for photos.

Florence Pugh politely scooted to the side to clear room — a less-crowded photo would turn out better — before quietly settling back into place. The photographers quickly turned their lenses on her.

She plays the star role in a wrestling film “Fighting with My Family” — “very glamorous,” she laughed, which was released last week. Next up, is a “complete opposite” style of movie — Greta Gerwig’s “Little Women,” which comes out at Christmas.

“I play Amy, with all the dresses, all the corsets and all the petticoats,” she said. Her gran had read the book to her when she was young, but the real thrill was working with the other actresses, she explained.

“I was acting with all my childhood heroes, Meryl Streep, Saoirse Ronan, all of those amazing women. Laura Dern played my mum — when does that happen?”

The rising star plans to give herself some time off, to read and maybe catch some sunshine — perhaps in Greece.

Meng Meiqui, of the Chinese and South Korean girl pop group Cosmic Girls, meanwhile, greeted a parade of guests brought over to meet her, lifting her prominent, gold Chloe earrings to show how light they were, when complemented on their style. The singer had flown to Paris from China for a short stay and to see two fashion shows — the other was Lanvin.