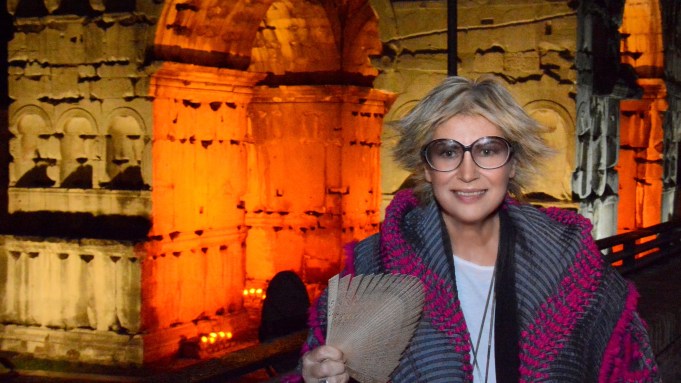 ROME — Why is a life-size resin statue of a rhinoceros positioned a few steps away from Rome’s Arch of Janus, built in the fourth century B.C.?

“The rhinoceros is a symbol of Rome and of strength,” Fendi explained during a walk-through of the cultural hub, which spreads over 37,800 square feet and six floors, recovered from the restoration of three rundown, neighboring buildings.

With her namesake foundation established in 2001, Alda Fendi, one of the five second-generation Fendi sisters together with Anna, Carla, Franca and Paola, has been supporting the restoration of several monuments and landmarks in Rome such as the floors of the Basilica Ulpia. She also mounts theater performances open to the public because she believes “everybody should be able to enjoy art.”

Starting on Dec. 14, Michelangelo’s sculpture “Crouching Boy,” dating back to around 1524, will be on display at Rhinoceros for three months, on loan from the Hermitage Museum in St. Petersburg, Russia, as part of a cultural collaboration with the prestigious institution. Fendi asked Academy Award winner Vittorio Storaro to design special lighting installations for both the resin rhinoceros and Michelangelo’s sculpture. Ahead of the arrival of the “Crouching Boy,” the museum is showing 10 autographed Michelangelo architectural drawings. “They are very rare, special and important,” said Fendi, pointing at the displays. “Not many know that he was also an architect as well as a painter and sculptor.” In a nearby room, the Fondazione is running “The Agony and the Ecstasy,” the 1965 film starring Charlton Heston as Michelangelo. All these initiatives are open to the public for free.

Throughout the conversation, Fendi talked about artistic “experiments” and new art forms. “I hope with this palazzo to convey this message — to do art starting from real things, social events, the news. Art today has become trade and it’s wrong, the value of artists has been inflated by galleries and it’s unbridled commerce. You can’t use art for financial gain.”

With the location, Fendi mused that she wanted to create a space that would be international and “shake up” the art world. “My goal is to break away from institutions and provide a nonstandard culture, the same way we have done this over the past years, taking art from the street, from all that happens in the world and make it into culture.”

In addition to the exhibition space, Nouvel designed 24 apartments available for rent, but Fendi clarified that the apartments are managed by the international company The Rooms of Rome and Spanish entrepreneur Kike Sarasola, and not by the Fondazione. “You live with art inside and outside,” said Fendi, taking in the breathtaking view of Rome as each window frames landmarks such as St. Peter’s Basilica, the seventh-century church of San Giorgio in Velabro or the park on the Palatino hill. “You can almost touch the monuments from here,”  she said, gazing outside. The size of the apartments range from 432 to 1,188 square feet.

Nouvel paid tribute to the history of the buildings with a conservative restoration while adding new elements including sleek steel structures that hide elements such as bathrooms and kitchens. The steel contrasts with the exposed brickwork of the walls, the cement floors and iron elements. “I like his strong architecture,” said Fendi, adding that this was Nouvel’s first and exclusive job in Rome. “The choice of the architect was not easy. I also thought of Tadao Ando and Kazuyo Sejima, but then I found Nouvel’s poetic approach to the locations very appealing. You see, he says he restored the ‘wrinkles ‘ of the building,” she said, pointing to the facade, which retains its original appeal. Fendi did not disclose the amount invested in the project. “It would be hard to tell, the works were supposed to last 12 months, then they spilled over to 28 months — you have to be very determined to do something like this,” she said.

On the terrace, there is the Caviar Kaspia Roma restaurant and bar overlooking the heart of Rome, where legend has it that the city was founded on the river Tiber. “I wanted a very international but very traditional and elegant restaurant here,” she said of the venue. “Rome needs to be international, the crisis has slowed it down, it’s sleepy like the rest of Europe, but big ideas and culture can restart from here. Politicians here are guilty of a very big mistake, cutting investments in culture and this is a very serious issue, because culture means democracy. Without it, a decay of the country is inevitable.”

Fendi said she always harbored a strong passion for the arts. “I had a wonderful job for 40 years, working with Karl Lagerfeld and always at the forefront,” said Fendi, who was in charge of the furs for the brand and has not been involved in fashion since the sale of the family company to LVMH Moët Hennessy Louis Vuitton in 2001. She still touted the decision to sell for “a very valid reason. We thought that, at that moment, on the eve of globalization, there was no more room for a family like ours based on artisanal craftsmanship, standing among huge multinationals. We were the first to understand this and we leveraged our incredible image in the world.”

Fendi has never looked back and is fully focused on the Fondazione, which will live on for 120 years, she explained, and she sees continuity as her daughters Giovanna and Alessia are already actively involved in it and so are their own children. “I always tell them that to live near artists and the arts we do ourselves a favor, as they always reward us and make us feel young.”