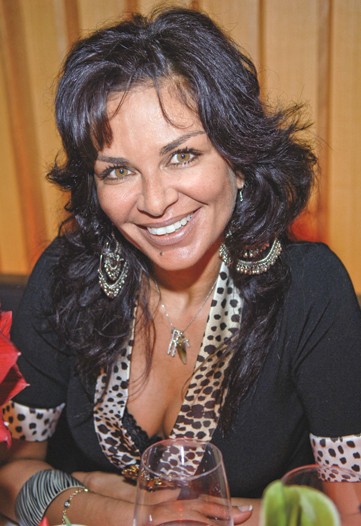 It’s been six years since Rena Sindi threw a major bash in New York. It was for the Dior fragrance Pure Poison, and guests dressed according to theme: Alice Temperley wore a crown of “poison” ivy and Jackie Astier and Alex Kramer had snakes painted on their bodies. By the end of the night, Sindi was karaoking to “Fame” before leading the charge to Bungalow 8.

Needless to say, things have changed. These days, parties are “events” and they are as much about business as they are about pleasure. “From what I hear, New York doesn’t have the parties that we had at that time,” Sindi says, on the phone from her home in London. “People are conscious of spending and not being too flamboyant.”

Well, not tonight. Tonight, Sindi is in town to host another dinner for Dior, this time celebrating lipstick. The theme, Sindi says, is Le Moulin Rouge, La Vie en Rouge, anything sexy and everything French. Several people who were at the 2004 fete will probably be at this one, and Sindi hopes they’ll find it just as fun. “I think what I was able to bring is that it was all about, ‘Let’s make it a really fun night,’” she says. “At the end of the day, that is what really makes it successful.”

Before the big night, WWD spoke with Sindi about entertaining across the pond, how to get New Yorkers to dance and business school.

WWD: Why did you decide to host this particular dinner?
Rena Sindi: I’ve had a relationship with Dior for the past decade. They said they’d love me to do it, and because we have this relationship I was very excited. I am actually doing my M.B.A. at Cambridge at the moment, so I am picking up very few events.

WWD: Really? Why business school?
R.S.: What is really interesting to me is doing events for brands and marketing — coming up with themes, promoting their brands. But without a real understanding of the numbers and how to grow a business, I felt a little bit at a disadvantage.

WWD: How do you think the parties brands throw now have changed?
R.S.: Definitely given the economy and what is going on in the world, people are more careful, obviously, spending their dollars. That kind of flamboyance that we saw some years ago doesn’t exist much anymore.

WWD: When was the last time you were in New York, and did you go to a party?
R.S.: I was there in October, and I went to Allison Sarofim’s Halloween party. That was a great party, and of course dressing up in costumes is right up my alley.

WWD: Do you miss the New York social scene?
R.S.: Yes, of course. I feel I belong there more than everywhere else. I mean, I like living in London. My life is different though. Going out in New York does have that feeling that you are doing something all the time. I think that people forget that you want to have fun being around friends and dance. If you don’t dance at a party, it’s not fun.

WWD: But people don’t really dance here.
R.S.: Oh really? Oh, no wonder. I understand now why they said, “You’d better make it here. No one will dance if you are not here.”

WWD: It’s kind of true.
R.S.: The only way to get people to dance and have fun is if you are doing it yourself. I mean, to me that is what it’s always about. If you set the stage as a hostess, people take it from there.