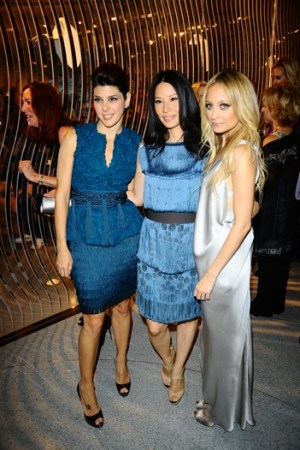 The election night might be over, but politics were still in play when Alberta Ferretti opened her new store on Wednesday evening with a bash hosted by Lucy Liu. As guests including Amy Smart, Elisha Cuthbert, Nicole Richie and Zelda Williams crowded into the West Hollywood boutique to sip Champagne and peruse the clothes, a huge wave of demonstrators marched up Melrose Avenue bringing traffic (and the party’s valet service) to a halt. They were protesting Proposition 8, the ban on gay marriage that was narrowly passed on Nov. 4.

Ferretti took it all in stride. “What a night, and a little excitement at the end, no?” she said. “I just love L.A. It’s such an exciting place and it was a wonderful party. It’s so important to have a good opening.” Despite the slight delay, Marisa Tomei, Benicio del Toro, Matthew Rhys, January Jones and the rest of the party gamely trooped over to the private dinner afterward at Bar Marmont on Sunset Boulevard. Tomei, for one, is a Ferretti fan. “We met in Milan, and I’m more than happy to be here,” said the actress. “I love her line; the clothing is chic. It has shape but retains such a feminine feel.”