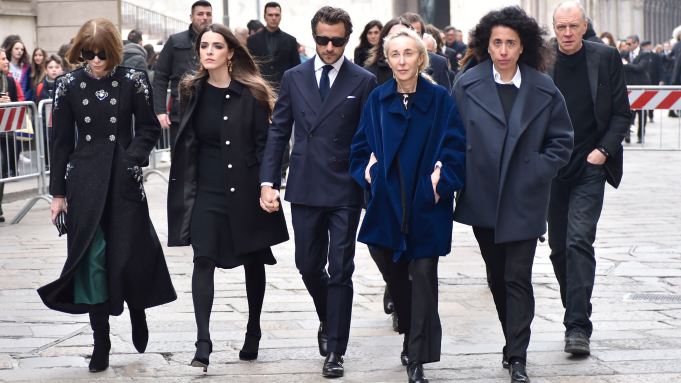 MILAN — Franca Sozzani could always command a gathering of industry insiders — any day, any time.

The same happened on Monday when a mass was held at the tail end of Milan Fashion Week to remember the late editor in chief of Vogue Italia, who died in December.

It’s probably easier to say who was not at Milan’s gothic Duomo cathedral. Police set up barriers to control access to the church while crowds of curious onlookers clustered around — iPhones handy and ready for selfies. There were institutional personalities, ranging from former Prime Minister Matteo Renzi and the city’s mayor Giuseppe Sala to Ivan Scalfarotto, deputy minister for economic development, as well as Carlo Capasa, president of the Italian Chamber of Fashion, and Beppe Modenese and Mario Boselli, both honorary presidents.

“I saw Franca until her last few days. Her death has left a big empty space in the life of her family, friends and colleagues,” said Valentino Garavani, flanked by Giancarlo Giammetti.

His design heirs, Pierpaolo Piccioli and Maria Grazia Chiuri, who is now at Christian Dior and was accompanied by Sidney Toledano, were also in attendance. Piccioli said the memorial signaled “a recognition” of Sozzani’s stature. “She was a true friend for me,” he said.

“We called her bambolina [‘little doll’ in Italian],” said Rosita Missoni. “When we were abroad together, all of us Italians would cozy up. She seemed all delicate, but she was determined and had an extraordinary energy.”

Her daughter, Angela Missoni, agreed. “She blended strength and lightness, and she had a big sense of humor. She was always willing to help, incredibly open to listening to others.”

British designers were represented by Burberry’s Christopher Bailey; Alexander McQueen’s Sarah Burton; Stella McCartney; Victoria Beckham, and Stephen Jones. Bailey said the ceremony was “moving. It was about friends sharing personal stories about a person we all admired and respected.” Artist Daphne Guinness also attended the event, as did Emanuele Filiberto di Savoia.

Asked to share a memory, Alber Elbaz kindly said: “Not today, please.” Bruce Weber also struggled to speak. “I miss her too much, I can’t.”

“I’m so grateful for having known her and for her belief in fashion and in myself. She was a great woman and the amount of people here today proves this,” offered Peter Dundas.

“She was divine,” said Manolo Blahnik. “She deserved to be remembered today.” One of Sozzani’s best pieces of advice? “Be yourself and do the things you like and want to do.”

Matteo Marzotto felt the memorial was very “respectful, with the choir and the Duomo — she would have adored it.” Industry executives and entrepreneurs such as François-Henri Pinault; Diego and Andrea Della Valle; Laudomia Pucci; Paolo Zegna; Valentino’s chief executive officer Stefano Sassi; Ferruccio Ferragamo, with his sister Fulvia, as well as Lapo Elkann, Gaetano Marzotto and Santo Versace were also there.

“I’ve so many memories of Franca, but if I have to choose one, I think the event she organized for the Vogue Fashion Dubai Experience in 2015 where I sang on the stage was great,” said Carla Bruni, who was among the models attending the memorial. Others included Kate Moss, who arrived with Stefano Pilati; Eva Herzigová; Mariacarla Boscono; Liya Kebede, and Anna Cleveland. Sozzani championed photography, and a group of her closest collaborators, ranging from Mario Testino and Mario Sorrenti to Giovanni Gastel, paid their respects.

The Duomo’s archpriest Gianantonio Borgonovo touched on Sozzani’s charitable efforts and how she set up Convivio in 1991 to support the fight against AIDS and Orphan Aid in 2001. “We don’t stop at the facade of a well-built building, but we unearth the foundations,” said Borgonovo of Sozzani’s interests that were close to her heart.

While there were no speeches, Sozzani’s sister Carla, who was accompanied by Kris Ruhs and her longtime friend Azzedine Alaïa, chose the readings, delivered by her daughter, Sara Maino, and Franca’s son, Francesco Carrozzini. Carrozzini was accompanied by his girlfriend, Bee Shaffer, and her mother Anna Wintour, as well as Jonathan Newhouse, chairman and ceo of Condé Nast International.