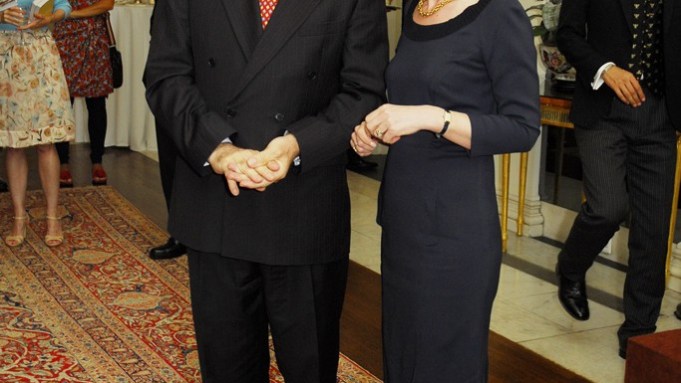 WASHINGTON D.C. — “I have no desire to project myself into that public arena,” says author Frances Osborne, 43, wife of Britain’s Chancellor of the Exchequer George Osborne, who turned up at the British Ambassador’s residence last week to promote her new book, “Park Lane.” A Downton Abbey-esque look at the ever-popular excesses and ironies of Edwardian life in England, it is Osborne’s first novel and, much like her two earlier biographies, takes full advantage of the diaries and letters of her famous, influential, and occasionally scandalousrelations. As British Ambassador Peter Westmacott graciously recalled numerous visits from Osborne’s husband during Westmacott’s last posting as British ambassador in Paris, the author took pains to downplay her own role as a political insider.

“Politics feels different from history,” she insists. “Everything is here and now, while history is about the examination of the past. For me, it’s interesting to see history through the eyes of people who are not famous as politicians, generals or statesmen.”

Osborne, her husband and their two children — Luke, 11, and Liberty, who turns 9 this week — reside at 11 Downing Street, next door to their friends, Prime Minister David Cameron and his wife, Samantha. In Washington, Osborne’s central spot in the Conservative inner circle seems important to mostly everyone in the room except the author, who insists she will never keep a diary. “It’s not me,” she says. “A diary would be too personal. I don’t like someone to examine my life.”

But then, she might never have been able to write her first two biographies without the help of two great grandmothers and their family diaries. “Perhaps not,” she agrees.

Osborne’s first book “Lilla’s Feast,” tells the story of her maternal great grandmother who wrote a cookbook, now housed in the Imperial War Museum, to survive life in a Japanese prisoner of war camp. Osborne’s international best seller, “The Bolter,” relied on the diaries of an ex-husband to tell the story of her paternal great-great-grandmother Idina Sackville, whose five marriages and five divorces include a scandalous stint with the Happy Valley crowd in Kenya.

As for the two heroines in her new novel — a debutante and a house maid — Osborne explains, “What interests me a lot is women who make wrong choices and then deal with the consequences and fight back to survive. Survival stories are more interesting if there’s something to survive.”

Osborne’s own fight to maintain her identity as an independent writer is not always easy for British voters to accept. As the one who handles the family finances, she says, “I’m less busy and so that falls on me.” So what does she think about the difficulties facing British housewives during these times of government-enforced austerity? Osborne, an Oxford graduate who studied law,ducks.

“I don’t know about the facts or the figures,” she insists. “That’s politics, and I’m interested in history.”