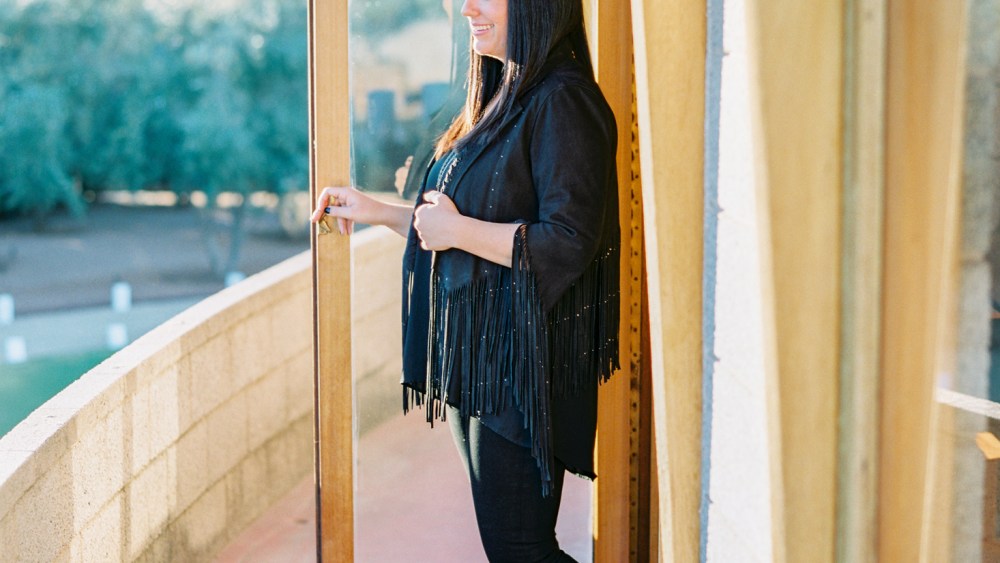 When Frank Lloyd Wright built Taliesin West, his winter retreat and architecture school, he put down deeper roots in Phoenix than most snowbirds might anticipate. Nearly 80 years later, the city claims several Wright designs and descendants like Sarah Levi, the architect’s 33-year-old great-great-granddaughter and first scholar-in-residence at the David and Gladys Wright House.

Wright designed the small-scale version of the Guggenheim Museum in the Arcadia neighborhood as a retirement home for his son in 1950. During a tour of its preservation progress in early winter, Levi paused on its outdoor, spiral entrance ramp with sweeping views of Camelback Mountain.

“I want everyone to experience this spot,” says Levi, who dedicated her master’s thesis in visual arts management for Columbia College Chicago to a feasibility study for the property’s transformation from a private residence into a museum and education center. “It makes people take a moment of silence.”

Levi, who grew up 15 minutes north, learned to swim in the central courtyard’s plunge pool — it’s since been filled in. She plans to restore it, as well as a planter that once trimmed the ramp and the six-acre lot’s citrus groves, where she and her younger siblings played flashlight tag and harvested fruit to make candied orange peels with their grandmother.

“I mostly stick to soup these days for fear of breaking the home’s original GE stove, plus [the fact] that the fully intact kitchen is an incredibly preserved museum is a good excuse to order takeout for dinner parties,” says Levi, who sleeps in her grandmother’s former sewing room. She’s added a touch of modernity with a flat-screen TV against a wall. “I wasn’t allowed in there as a kid, so I really feel like I’m channeling her.”

Along with serving on the David and Gladys Wright House Foundation’s board and helping out with community outreach — e.g. hosting a yoga series on the manicured lawn — Levi is diligent about making her bed for weekday house tours. From original headboards to shelves to the kitchen’s quirky, custom-fitted trash bin, anything attached within the interiors remains as it always was. Stand-alone furniture and accessories have been replicated — the originals are either owned by family members or were sold at auction. The living room’s original grand piano, where the actress and Wright granddaughter Anne Baxter performed, is located in Wright’s home and studio in Oak Park, Ill., while its newly installed rug in his iconic “March Balloons” pattern was re-created from the original design plans.

“The rug was the missing link that tied the house together, so it was emotional to put it back,” says Levi, who tried to retrieve the original from its current owner, Hollywood producer Joel Silver.

Still, Levi and the Foundation have quite a lot of work ahead. After her grandmother passed away in 2008, the house fell into the wrong hands and nearly met the fate of another Wright home on an adjoining parcel that was razed by developers. Zach Rawling, an attorney and architecture enthusiast who grew up near the home, swooped in to save it a few years ago with the mission of landmark designation and rezoning it as a museum to open in 2018. There is a small group of dissenting Arcadia residents.

“It’s one of the most controversial zoning cases the city has seen in a while,” says Levi, who describes Rawling and his mother, Katharine, as her preservation angels. “They felt the same awe in walking up the ramp and knew they had to share it.”

Just as Levi was about to sign a lease for a condo, the Rawlings asked her to inaugurate the residency and handed her the keys. It’s the first time she’s lived at an address by her famous forefather.

“When I was young, people always asked me if I wished I had a Frank Lloyd Wright home, and now I do.”