Fred Hechinger and the Myth of the West

The young actor stars in Paul Greengrass' "News of the World," and his other forthcoming screen projects include "The Underground Railroad," "The Woman in the Window" and "Fear Street."

“If Tom Hanks was, like, secretly a tyrant, it would be totally demoralizing — I would quit. I’d be like, what’s the point of doing this at all?” says Hechinger, who stars in the Hanks-fronted and Paul Greengrass-directed “News of the World.” “People invest so much in [Tom Hanks’] goodness. It’s a lot to put onto a person. And at the same time, he lived up to it, more than I could imagine.”

Hanks is as generous as we’ve all been led to believe. (He gave gifts to everyone on the film set once they wrapped!) But working with him did dispel a different Hollywood myth for the young actor. “My big takeaway from this [film] was that the most important thing is making everyone on set feel comfortable and safe. And then everything follows that,” says Hechinger, on a FaceTime call from Maui. “There’s this — again — myth that anxiety and fear can be these tools in filmmaking; that as a director or an actor you can make other people feel bad and that will make them do better work. And I just think that’s total hogwash. And I think that Tom is a shiny example among men, but a shiny example of how we are all doing this together.”

Hechinger, who’s been in Hawaii filming the HBO series “The White Lotus” since mid-October, had yet to watch the final film two weeks before its release.

“I shared this with Paul: I like to see movies in theaters the first time I see them — but if they’re not in the theater, I want to make sure that the viewing conditions are right,” he says. (He recalls the experience of seeing the Greengrass-Hanks film “Captain Phillips” in theaters with his mother in almost spiritual terms.) “I love the full experience of getting lost in [a film]. So I’m just trying to figure out how I can do that here. And I like to watch them with other people, too,” he adds. “I mean, in New York, I like going to movies alone, but still it’s at a movie theater. So even if I’m alone, I’m surrounded by strangers in a dark room.”

“News of the World” is being released theatrically on Dec. 25, and it’s one of the films generating top award season buzz. Hanks plays the role of Captain Jefferson Kyle Kid, a Civil War veteran who travels around by horse and carriage to various towns in the American West to deliver the news through live readings. He encounters an orphaned girl along the way, and the film follows his journey of bringing her home. “This movie is about the power of storytelling itself. It’s meta in that way,” says Hechinger, who the pair encounter while stopped in one of those towns. 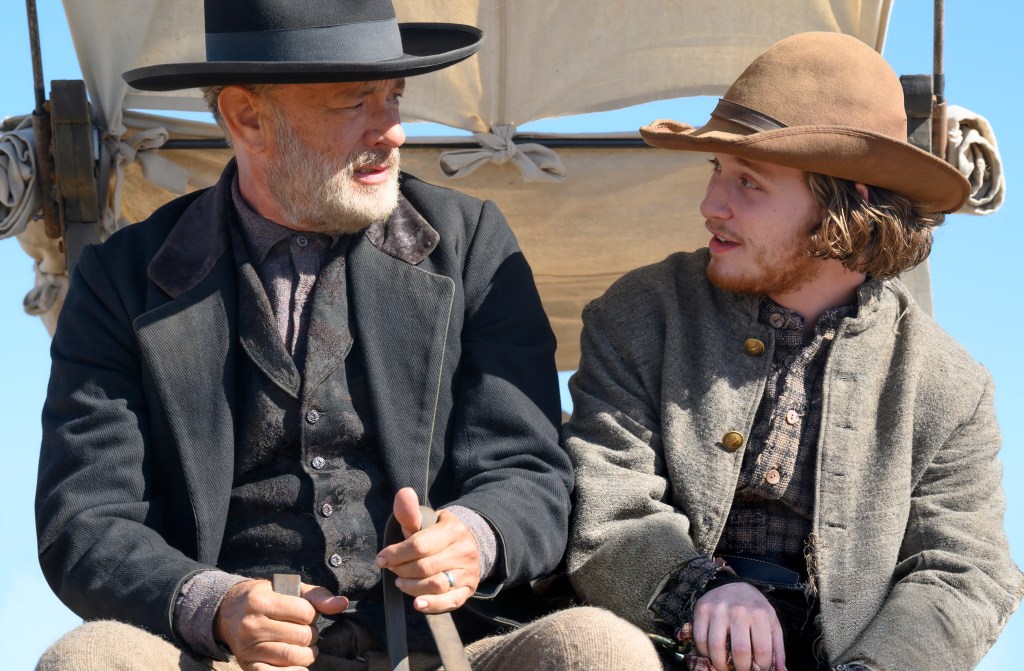 A still from “News of the World.”  Courtesy of Bruce W. Talamon/U

Hechinger regards “News of the World,” set in post-Civil War Texas, as a modern story, despite being a period piece. “It will feel contemporary until our country makes progressive, radical, substantial alterations to how we govern and where money goes, and who owns land. The period piece of it to me was exciting because of how relevant it felt,” he says. “Ever since the promise of ’40 acres and a mule,’ we have not delivered for Black people in this country. We have completely stolen the land of Native American people. And over and over again, it’s all these things that we say we’re going to change, and don’t change.”

He recently watched Robert Altman’s 1976 film “Buffalo Bill and the Indians, or Sitting Bull’s History Lesson,” and was struck by the Trumpian nature of Paul Newman’s Buffalo Bill.

“I saw [‘News of the World’] in reference to, and also in kind of deconstruction of, westerns of the past,” says Hechinger, also referencing John Wayne classics and William Holden in “The Wild Bunch.” “There’s something very truthful about American brutality, spirit and myth-making that is so present in the great westerns,” he adds.

“News of the World” touches on the theme of truth in news, and presents reporting as a noble pursuit. The profession is personal for Hechinger; his grandfather (with whom he shares a name) was the longtime education editor for The New York Times and served on its editorial board.

“For Jefferson Kidd, it’s not about manipulation. It’s about: here are all these questions of when I tell you a story. What’s the underlying objective? Am I just here to entertain you? Am I here to make you think, am I here to give you company? And who are the people who want it to be a vehicle to spread lies or hatred?”

Hechinger mulls a question facing every media outlet in 2020, although for him it’s a question of how to distinguish between Hollywood and reality. “Like Kidd, how can you make people want to come and laugh, and also not lie to them?”

Next year, the actor will appear in Barry Jenkins’ miniseries adaptation of Colson Whitehead’s “The Underground Railroad.” He also stars in two book-based films produced by Fox ahead of its Disney merger — “The Woman in the Window” with Amy Adams and Gary Oldman, and the “Fear Street” trilogy based on R.L. Stein’s teen horror series — though the theatrical releases for both projects were delayed due to COVID. Both titles have since been acquired by Netflix.

Hechinger, who’s 21 and grew up on the Upper West Side, knew he wanted to do something related to storytelling from a young age. But his acting journey began during his bar mitzvah, when a family friend invited him to the UCB improv show “ASSSSCAT,” which featured the theater’s founding members. The next night, he was sitting on the floor of the basement theater in Chelsea. “I sat on the side of the stage, I watched and I said, ‘That’s the coolest thing ever. I want to do what they’re doing,'” he says. Hechinger’s already come full circle — his first UCB teacher, Natasha Rothwell (of “Insecure”) is one of his “The White Lotus” costars.

For the upbeat Hechinger, his interest in acting and storytelling is rooted in a pursuit of uncovering truth about what it means to be human. “That moment where you feel like you are really, really present and really alive, and really outside of your head and with someone else,” he says. “A lot of times, acting feels like a search for that moment.”

With ‘A Teacher,’ Nick Robinson Shows a New Side