Michelle Monaghan and Francisco Costa corralled the fashion flock to the Calvin Klein headquarters for the annual Free Arts fundraiser and auction. 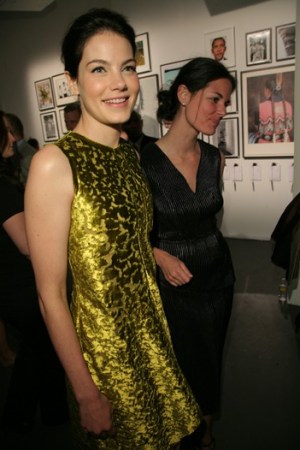 They say there’s no such thing as a free lunch, and the same goes for Free Arts. The organization provides workshops in areas like painting and drawing to underprivileged children at no charge, but the money has to come from somewhere.

“I didn’t know anything about [Free Arts],” Bacon admitted. “But I read up on it and I think it’s an amazing organization. In terms of mental health and happiness…we’re not all number crunchers or scientists. I came up in the public school system in the Sixties. Even if it was lame, you got crayons and a way to express yourself outside of violence and drug abuse.”

Monaghan, however, didn’t share the same creative upbringing. “[Art] was not something I was exposed to, growing up in a rural town of 700 in Iowa,” she said.

After guests including Phillip Lim, Ed Westwick, Karolina Kurkova and Hilary Rhoda perused the silent auction photographs and artworks, the moneyed set went into a back room for a live auction by Simon de Pury.