The actress appears next in "Knight of Cups," in theaters Friday. 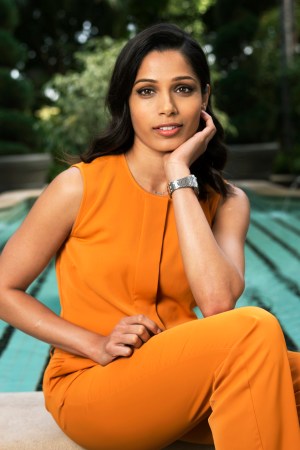 “I have such memories of this place,” Freida Pinto says, surveying the manicured lawn of the Four Seasons Beverly Hills.

The 31-year-old was on hand to promote her new Terrence Malick film, “Knight of Cups,” in theaters Friday. “We actually stayed here for six months while working on ‘Slumdog Millionaire,’” she says. Pinto may have burst onto the scene in Danny Boyle’s 2008 Academy Award-winning drama, but she’s since come a long way. In addition to “Knight of Cups,” she has “Jungle Book: Origins” with Christian Bale and Cate Blanchett out next year.

WWD caught up with the actress to discuss Hollywood stereotypes, diversity and why she’s teamed up with Jessica Chastain to change the conversation.

WWD: “Knight of Cups” is another improvisational film by Terrence Malick. What is the number-one thing you’d tell people about the film?
Freida Pinto: This film is all about being in the present. It was one of those experiences that you can’t really describe. Terrence would say, “Stay in the zone,” or “Talk about your childhood.” In that moment, what I could remember about my childhood, was what I said. I didn’t have the time to prepare for it.

WWD: How did you handle that?
F.P.: The first day I arrived on set, I looked at Christian and was like, “OK. He definitely can help me,” because he’s worked with Terrence before. But he looked at me, and said, “Oh, no. I don’t think you’ve been given the memo. Ladies do all the talking and I’m listening because I’m learning.” I was like, “What the hell are you going to learn from me?” Terrence was like, “There are things that you’re going to say to Christian that are going to make him ponder certain aspects of his life.” You go with the flow.

WWD: With certain directors, people may have opinions about films before they even see it.
F.P.: Stereotyping is one of the biggest problems we all have. You’ll see an actor play a certain role and then you see them play that role over and over again.

WWD: Has that been your experience?
F.P.: Absolutely. As much as I loved the “Slumdog” experience, it kind of put me in a box of the “sunshine girl.” For me to play someone negative or in any way non-savory is very hard for people to digest. It’s stifling at times because you go, “That’s not [all I have to offer].” In a way, I don’t blame them. “Slumdog” was a film bigger than any of us. I’m extremely happy with the directors I’ve gotten to work with, but you want to push yourself.

WWD: So tell us a little bit about “Jungle Book: Origins” — how will it be different than the one Disney is releasing later this year?
F.P.: It’s, obviously, two different directors: Jon Favreau [directing the Disney film] and Andy Serkis [directing Pinto’s]. [Our film] is going to be a beautiful marriage of motion capture and live action. I play a fun part in the film opposite Lockwood [Matthew Rhys] and Mowgli [newcomer Rohan Chand]. I get to sing a little lullaby in the film.

WWD: What are your thoughts on Hollywood’s diversity issue?
F.P.: I’m three years into producing something, which I thought would go much faster. But I realized, even before Patricia Arquette made her speech about equal pay and Jennifer Lawrence came out with her essay, how difficult it is when [the film’s subject] does not come from the world that everyone in America recognizes. That’s when I realized I’m not going to rely on head honchos of studios and launched a film fund [called “We Do It Together”] with Jessica Chastain, Queen Latifah and a mix of producers, casting directors, publicists, actors, writers, directors. It’s not so much a profit-making racket because there is actually no way with the nonprofit model that you can make money. [But] what you can do is you can change the conversation. And that’s what I’m most interested in.