The actress talks about prepping for the "Planet of the Apes" prequel and playing a deity in "Immortals." 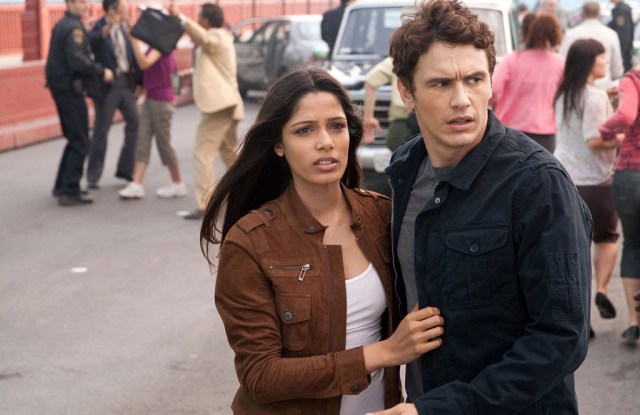 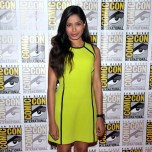 Star of the summer blockbuster contender “Rise of the Planet of the Apes,” a prequel to the on-again, off-again series that co-stars James Franco and is set to hit screens Aug. 5, the Indian actress paid no heed to the historic franchise — neither the 1968 original “Planet of the Apes” nor its 2001 remake by Tim Burton.

“I have not even seen the films, to be honest,” she confesses. “I think the best way to do it is go in ignorant.”

Instead, she researched her role as a primatologist by immersing herself in documentaries about chimpanzees, research and animal testing. Interviewed during the Cannes Film Festival, the 26-year-old joined her fellow L’Oréal brand ambassadors at the annual amfAR Cinema Against AIDS gala, which she attended with her boyfriend and “Slumdog Millionaire” co-star Dev Patel. Last year, Pinto was forced to skip the Cannes premiere of Woody Allen’s “You Will Meet a Tall Dark Stranger” because she has been filming back-to-back ever since the award-winning “Slumdog” propelled her from aspiring model to international film star in 2009. Filming with Allen gave her a more relaxed attitude toward tackling high-profile projects like “Rise of the Planet of the Apes.”

“I’m not thinking about the fan pressure or anything right now,” she explains. “On the Woody Allen film set, I wasted a lot of my time being nervous, and I just feel the more you get nervous, the less you focus on the more important thing: delivering your goods.”

Pinto took a similarly single-minded approach to another big-budget production, “Immortals,” a Greek warrior epic scheduled for release in November. Faced with a testosterone-fueled cast including Mickey Rourke, Henry Cavill, Kellan Lutz and Stephen Dorff, she hit the gym — only to have director Tarsem Singh completely rewrite her character, Phaedra.

“I did not punch a single person, kick a single person,” Pinto laments. “I was training towards this one particular thing and then I had to zap it out right there and do the exact opposite. There was this very stoic look that he wanted me to have with not too many facial expressions.”

Her next project provided more emotional range. Pinto has just finished shooting the title role in Michael Winterbottom’s “Trishna,” a film version of the 19th-century Thomas Hardy novel “Tess of the d’Urbervilles” set in modern-day Mumbai and Rajasthan.

“Being on set every day all nine hours invested into your craft just gives you a completely different feeling,” Pinto says. “That is a true gift.”

Indeed, her role models are actresses known for pouring their all into each part, beginning with Kate Winslet.

“I love the way she has molded her career and she has just kept challenging herself,” she says. “She just does accents like she wakes up in the morning and she can be American, German, anything.”

She also cites Charlize Theron’s performance in “Monster” as a personal revelation.

“That film kind of set it in stone for me to be an actress,” Pinto says. “I felt what she had done for that character, she had given her not just her body but also her soul, everything.”

That Pinto looks up to actresses who, like her, have lucrative cosmetics contracts but are still considered serious thespians should provide a clue into what direction she wants to take her career. But first, she plans to take a break to recharge her batteries. Topping her list of destinations are Europe and South America.

“Strangely enough, when I’m passing immigration at airports, I keep getting, ‘Are you Brazilian?’ all the time,” she says. “I’m very curious to see if that would actually happen when I’m in Brazil. I love going into a country and just blending.”