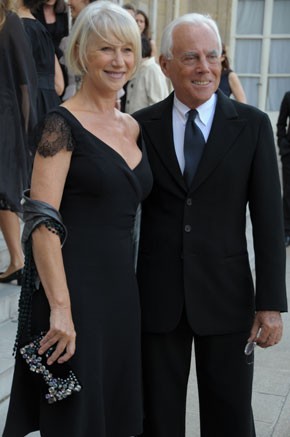 French President Nicolas Sarkozy is ready for a makeover a la Richard Gere in “American Gigolo.” Or so he joked to the costumer of that landmark film, Giorgio Armani, moments before he decorated the Italian designer as an Officer of the Legion of Honor at the Elysee Palace in Paris Thursday. The event, at the tail end of couture week, also saw Italian actress Claudia Cardinale elevated to the level of Commander. In a speech packed with one-liners that had the crowd roaring with laughter, Sarkozy played up his honorees’ origins. “As you know, I’m rather close to Italians,” he said, alluding to his new wife, Carla Bruni-Sarkozy, who did not attend the ceremony. “You are two individuals with great merit,” he continued, lauding Armani’s capability “of speaking to everyone” with his diverse designs and products that run the gamut from couture to pastries.

Actress Helen Mirren bowed before Armani in offering her congratulations. “The first time I had a posh dress, it was Armani,” she related earlier, also recalling how he did the costumes for her 1990 film “The Comfort of Strangers.” Mirren, who made a rare couture week appearance, recited the inscription she penned in the guest book at the Ritz: “I feel like Cinderella who got to stay in the palace without having to marry the boring prince.” Then she hastened to add: “I’m not referring to any British prince incidentally.” Carla Fendi, Silvia Venturini Fendi, Nathalie Rykiel, Lady Helen Taylor, Eugenia Silva and Tina Turner were among the notables who gathered in the sunlit Jardin d’Hiver for the ceremony. Turner accessorized her sparkling green jumpsuit with her own Legion of Honor medallion. “I’ve got my little shiny one,” she said with a laugh, patting the prize. But soon she’ll be rigged up with a microphone, with a concert tour kicking off in America this October and next January in Europe.

Later, at a L’Oreal-sponsored dinner to celebrate Armani’s award at Pavillon Ledoyen, Turner tested out her pipes, singing a few bars of one of her signature songs acappella and straight to the designer: “You’re simply the best….”