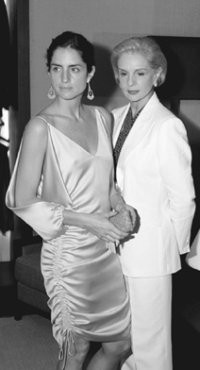 “Well trophy season is finally over, that we can be grateful for,” said Tom Hanks, as he and wife, Rita Wilson, arrived to co-host Saks Fifth Avenue’s benefit dinner for Cedars-Sinai cancer research, which raised $1.5 million. But the duo’s co-host, Jennifer Garner, was stuck on the “Alias” set. “Well, she is the hardest woman in show business — I mean, the hardest-working,” quipped Hanks to Scott Foley, Garner’s husband.

Event chairs Kate Capshaw and Jamie Tisch greeted guests Lisa Kudrow, Nia Vardalos, Jeffrey Katzenberg and honoree Stella McCartney, who lost her mother, Linda, to cancer in 1998. “It’s a rude awakening, suddenly having to look after yourself,” said McCartney. “The one positive thing that came out of this is that I learned how to do that.” McCartney, who brought along her fiancé, Alasdhair Willis, looked tan and radiant after almost a week out West.

Meanwhile, in Miami, Carolina Herrera and her daughter Carolina Jr. welcomed such guests as Pauline Pitt, Emilia Fanjul Pfeifler, Melanie Charlton and Kate Gubelmann, to the opening of her first CH Carolina Herrera store in the U.S. Herrera brought a touch of elegance to a town besieged by college students on spring break.

And Blaine Trump, for one, couldn’t have been happier to escape South Beach for the evening. “Try doing yoga with house music blasting all around,” she said.