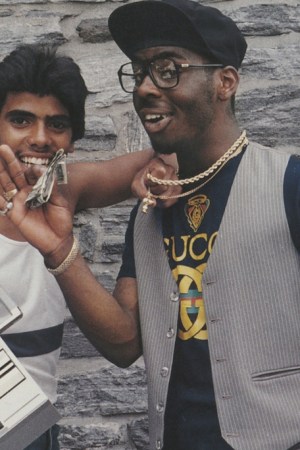 Long before hip-hop appropriated high fashion and vice versa, before Pharrell Williams performed for Chanel and Kanye West became a front-row fixture, early rappers were busy stretching and starching the laces of their Adidas sneakers, spray-painting their jackets and shopping for Cazal sunglasses and Kangol hats to create their look.

In his documentary “Fresh Dressed,” which hits theaters June 26, journalist Sacha Jenkins explores the relationship between the clothes and the music and the eventual retail and marketing juggernaut it created.

“The task was to make a film that could entertain and enlighten the core audience but also bring a lot of other folks in on the rich history of where all this stuff came from, the climate and the environment that created it and why it would go on to influence folks who aren’t of that world,” Jenkins says.

“I’m not a fashion person. I’m more interested in the conditions that created the fashion, how it was a reaction to what was happening and how these artists created their own vocabulary based on how they wore things. I felt that [a documentary] would be a great backdoor way of telling the history of hip-hop through the clothes,” says Jenkins, who interviewed designers ranging from Karl Kani to Riccardo Tisci as well as a slew of rappers including Williams, West, Sean “Diddy” Combs and Nas, who was a producer on the film.

In the Eighties, the term “fresh” came to mean crisp, new-in-the-box fashion, and a dapper appearance cultivated. Says West in the film, “Being fresh is more important than having money. The entire time I was growing up I only wanted money so I could be fresh.”

“Hip-hop was just something that we did, no one was thinking money,” says Jenkins, 43, a New York City native who published his first zine — about graffiti — at 17, followed by a hip-hop newspaper called Beat Down, and a critically recognized magazine called Ego Trip.

Jenkins was a music editor at Vibe in the early Aughts during the height of what became known as urban fashion — lines created by music moguls Russell Simmons, Jay Z and Damon Dash.

“I remembered all the money that was generated by those brands at their height and how it’s now gone. I felt it was important for people to understand the power of the dollar and who generated it,” Jenkins says. Among several amusing sightings in the archival footage is a then-unknown Channing Tatum walking in a Sean John runway show.

Jenkins notes, “Now kids in the inner-city aren’t really interested in wearing those brands. Their loyalties never sway from Ralph Lauren, Gucci and Prada.” There are plenty of references to the aspirational wares of Lauren and Tommy Hilfiger, although neither designer took part in the documentary.

Other designers such as Tisci spoke to Jenkins about embracing hip-hop culture and listening to rap 20 years ago, before it was popular in Italy. Tisci says he invites musicians to his shows because, “these kids are experimental. I like people who take risks.”

As Jenkins put it, “It’s not necessarily about the brands per se. It’s about the attitude of hip-hop applied to these things and how it took on a certain cache.”