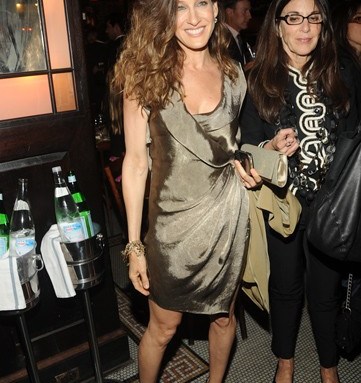 Since 1991, Friends In Deed has been providing emotional support to people with HIV/AIDS and other potentially fatal illnesses. On Tuesday night, the organization held its annual fundraiser at Balthazar in SoHo, and there were many friends indeed. Among those who showed up to dine on steak and frites and mingle with the organization’s president Cynthia O’Neil and the organization’s chairman Mike Nichols were Diane von Furstenberg and Barry Diller, Ellen Barkin, and Bernadette Peters. The evening’s first honoree, Donna Karan, talked about breaking down the East/West dichotomy in medicine and treating the patient rather than the disease. Then Sarah Jessica Parker got atop the makeshift box everyone was speaking from and serenaded Bravo programming head Andy Cohen, who thanked his mother Evelyn in his speech for teaching him about volunteering and helping to make sure he turned out “very very very gay.” But the evening’s real star was one of the guests: Nancy Jarecki, who showed up wearing a helmet. Turns out, the wife of Moviefone founder Andrew Jarecki had a brain aneurysm six weeks ago, but she’s already back out painting the town red. “I was at a screening of Ali Wentworth’s new show ‘Head Case’ when it happened,” she said. “Which is funny when you think about it because I had a brain aneurysm.” Jarecki said she particularly liked her helmet. “Tory Burch designed it for me,” she said. “If you have to wear a helmet, this is a pretty good one.”