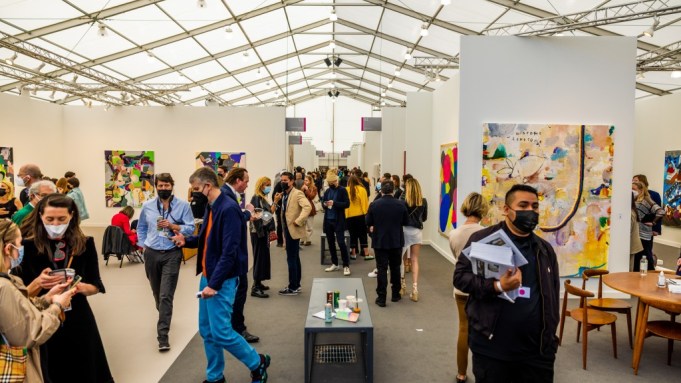 “I went to Art Basel and got my feet wet,” said 21-year-old rapper 24kGoldn, born Golden Landis Von Jones, as he roamed the booths at Frieze Los Angeles. “Now I’m diving in.”

It was his first time at the art fair — which began in London before expanding to New York and L.A.

The last time Frieze came to L.A. was in February 2020, days before the impact of COVID-19 was felt throughout the city and elsewhere. It was held at Paramount studio then. This year, relocating to Beverly Hills, the fair was inside a massive tent by The Beverly Hilton — open to the public starting at 5 p.m. on Thursday through Sunday.

The city was abuzz all weekend, with the fair attracting 100 galleries, local and global exhibitors, and visitors from the U.K., Europe and Asia. Drawing artists of all ages, international galleries and big-name collectors, L.A. has become an important market, said Bonnie Brennan, president of Christie’s Americas: “Los Angeles is central to the global art market. It is a thriving cultural center and home to a wonderful network of esteemed collectors.”

The fair lured many of the familiar attendees — Jay Jopling of White Cube for one — as well as new faces, like Mira Dimitrova, director of sales at Stephen Friedman Gallery in London. It was her first time at Frieze L.A., an opportunity to introduce the West Coast to the work of Grenada-born U.K. artist Denzil Forrester.

It “was a resounding success,” Dimitrova said of Day One. “The response was incredibly positive, from public and institutions alike. Denzil is looking forward to solo shows at the Kemper Museum [in Kansas City, Mo.,] and the ICA Miami in the next year and the booth at Frieze was the perfect opportunity to introduce a recent body of paintings to a new and influential audience. Having said that, we had very brisk sales on opening day, both of paintings and works on paper, and collectors responded to Denzil’s unique language and dynamic compositions by making swift commitments.…We will definitely be back.”

Within an hour of the VIP opening, L.A.’s David Kordansky Gallery sold out seven paintings by artist Michael Williams, at $100,000 each. Hauser & Wirth — the Swiss art gallery in L.A.’s downtown arts district — sold out its entire stand of work by French artist Camille Henrot. Pace Gallery, with locations around the world (and soon coming to L.A. on South La Brea Avenue), sold a “gazing ball” sculpture by Jeff Koons for less than $3 million while David Zwirner (also expanding to L.A., in East Hollywood) sold a painting by Alice Neel for $1 million, four new paintings by Josh Smith for $220,000 each and a new work by Jordan Wolfson for $400,000. Meanwhile, Chris Burden’s “Dreamer’s Folly,” a popular attraction making its U.S. debut in the Gagosian booth, sold to a European institution for an undisclosed amount, while White Cube’s sales included a Beatriz Milhazes painting for $1.2 million and a five-panel work by Imi Knoebel for 395,000 euros.

“We saw the number of bidders in California grow by 8 percent in 2021 compared to 2019, while the growth in buyer spend was up 78 percent compared to 2020,” revealed Brennan. “We are continuing to develop compelling exhibitions and events in our Los Angeles gallery in 2022 and beyond to harness this momentum.”

The British auction house, with its L.A. location just blocks away from the fair on North Camden Drive (also home to Sotheby’s), seized that momentum by hosting a talk (centered on NFTs — the industry’s hottest topic) while showcasing its latest exhibition: abstract paintings by Cy Twombly, Brice Marden, Louise Fishman and Stanley Whitney, open from through March 11.

“The exhibition beautifully recontextualizes and reframes narratives around the history of abstraction through presenting work by the lesser-known female artist Louise Fishman alongside some of the most well recognized masters of the 20th century,” explained Brennan. “Twombly and Brice Marden, and Stanley Whitney are currently among the most coveted names in contemporary art, with a forthcoming presentation at the 2022 Venice Biennale.”

Among its attractions, Frieze introduced the BIPOC Exchange, a community-focused space located in The Beverly Hilton, outside the fair tent. Highlighting organizations and establishments like the People’s Pottery Project and Tierra Del Sol — looking to empower the underserved through art — it was organized by artist and activist Tanya Aguiñiga.

Alongside Frieze, there were countless new exhibits throughout town by art institutions, galleries, museums and independent curators — including newbie Jack Siebert, son of Hollywood agent Leslie Siebert, and collaborator Caio Twombly, who presented a show with all-female painters at BLT Studios’ stage four, “I Do My Own Stunts,” open through March 7.

“It’s an extension of what I’ve been collecting for a long time,” said 25-year-old Siebert, who owns works by Shannon Cartier Lucy and Jana Schröder. “All female artists.”

Most notably, Felix L.A. was held again this year. Attracting many of the same attendees as Frieze — though perhaps a younger crowd — the contemporary art fair took place from Feb. 17 to 20. Cofounded by Dean Valentine and Al and Mills Morán, the 2022 edition took over two floors of The Hollywood Roosevelt, as well as its poolside cabanas, featuring 60 exhibitors from around the world.

The fashion crowd got in on the action. Among the retailers and brands holding events in honor of Frieze were The Webster, hosting a cocktail hour with Viso Project to toast its partnership with Zaida Sabatés; Dries van Noten and Jeffrey Deitch presenting Raqib Shaw’s first L.A. exhibit, “Tales From an Urban Garden”; London-based jewelry designer Rosh Mahtani of Alighieri celebrating her collaboration with Brazilian artist Samuel de Saboia; London-based Matchesfashion, which took over a midcentury modern home known as Simon House in Beverly Hills’ Trousdale Estates for a weeklong pop-up; Burberry, dining the likes of model Bella Hadid and “Euphoria’s” Jacob Elordi on the rooftop of its Beverly Hills flagship on Friday night (marking its in-store installation), as well as Prada, which brought its traveling activation known as Prada Mode for a two-day event with 34-year-old artist Martine Syms, exhibiting an installation titled “HelLA World.”

“L.A. is a real place of experience,” said Syms of growing up as a working artist in the city. “It’s so expansive. It’s decentralized, which I find to be quite liberating. You can get a lot of work done. You have space. Those are the good and bad things about it. This idea of individuality or expression, that’s the western expansion — the idea that there’s not a central downtown, there’s these different villages effectively that you’re wandering through. You can have so many different experiences in L.A., depending on when you come, who you’re with, where you stay, and I think the art world here is the same.”

Fellow L.A. native Bettina Korek — formerly the executive director of Frieze Los Angeles and now the chief executive officer of London-based Serpentine Galleries — was excited to be home “during such an exciting time,” she said.

“Being back in L.A. is such a treat for me,” said Korek at Serpentine’s cocktail event on Wednesday night, which she hosted with Serpentine’s artistic director Hans Ulrich. Held at the estate of entrepreneur Matthew Orr and Sybil Robson Orr — the producer and philanthropist behind “The Robson Orr TenTen Award” (given to a British artist every year) — it attracted a prominent art crowd, including Jwan Yosef, Amy Cappellazzo, Alex Israel, Mikolaj Sekutowicz, Nicolas Berggruen and Tania Fares, Jeanne Greenberg and Jeffrey Soros, as well as fashion designers Peter Dundas and Nicholas Kirkwood.

“We’re really excited about the connections that we’re building and forging between London and Los Angeles,” continued Korek. “Being at Sybil Robson Orr’s house, who’s such an incredible connector through her TenTen project that commissions additions for the British Council, it’s a great example of how deep the connection is between the two cities.”

Also in town for Frieze, though visiting from New York, was 31-year-old artist Chloe Wise, who was celebrating the launch of her new book, “Second Nature.”

“It’s mostly serving as an archive of the last four years, if not more, of exhibitions I’ve had with Almine Rech, as well as some museum exhibitions and some work in progress images, some essays by different writers and thinkers I’ve worked with,” said Wise. “It’s interesting to see how that lapsing of time becomes almost like a chronological record.…It gives a pretty transparent picture into the inside of my brain, my studio and practice.”

What does she think of the L.A. art scene?

“I don’t,” she said plainly, adding: “I don’t know if I see a difference, but I also think New York has a particular grit, a hectic urgency that gets more production and passion and enthusiasm, because you’re not chillin’. I feel like it’s a big chill here. I could never chill.”

She was certainly full of energy, despite having just flown in from New York Fashion Week, as she signed book copies for friends inside the lobby of The West Hollywood Edition — a hot spot all week (along with NeueHouse and Bar Lis at the Thompson hotel, where Whitewall threw a party in collaboration with Vertical Crypto Art and Rarible) leading up to the weekend.

Edition hosted a number of events, including a celebration of L.A.-based artist Genevieve Gaignard’s work on its rooftop; a screening with Moses Sumney, and a late-night bash inside Sunset (Edition’s soon to reopened basement club) with Hilde Lynn Helphenstein — the artist, gallerist and art-meme master known as @jerrygogosian to her 104,000 Instagram followers.

“I wanted to bring the art world together, people that don’t typically hang,” she said at the party on Friday night. “Art dealers, artists.”

To her left — front and center as the pièce de résistance — stood her artwork “The Rabbit 02,” a statue she was unveiling: a nude female mannequin wearing Google Glass-inspired eyewear while kneeling on four blue gazing balls (à la Jeff Koons). It was a meme come to life.

It’s Helphenstein’s commentary on “the commercialization of art, the male gaze dominating art history and the art market’s obsession with money, sex and power,” with the glasses symbolizing the art world’s growing attraction to the metaverse.

“Reminds me of a Koons,” remarked a passerby.

“Good,” said Helphenstein, who reportedly used the same fabricator utilized by Koons for the piece’s chrome finish. “It’s supposed to.”