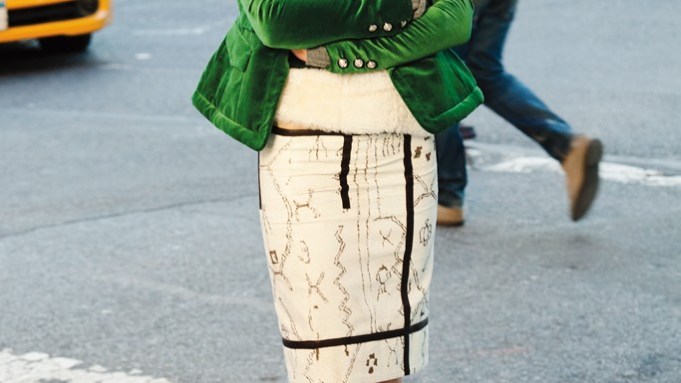 Despite the 10 Broadway productions behind her and the new TV show ahead, Sutton Foster is still getting accustomed to the whole star-treatment thing. So when she sees the location van for this shoot, she bursts out in laughter. “Oh my god, look at the size of that thing! Is that for me? It can’t be for me.”

She claims to be similarly underindulgent when it comes to fashion, describing herself as a T-shirt-and-jeans kind of girl. “I get so glam with sequins and makeup for Broadway, I tend to go the opposite way in my real life,” she says. Nevertheless, Foster is a two-time Tony-winning actress, so when she plays a part she doesn’t hold back. Stepping out of the van an hour later, she’s dressed in a scarlet asymmetric dress from Michael Kors’ fall collection. She lifts her foot off the stairs and, holding onto the door, playfully swings back and forth. Egged on by the photographer, she jumps down and twirls, hikes up her hem and shakes her hips.

New York has been Foster’s home for the past 15 years but now she’s moving to Los Angeles for a TV role. She acknowledges it’s a bit of a gamble. “In a way, I’m starting at the beginning,” she says. “I’m not known in the TV field. I hope my theater fans will find me. I’ll be in their living rooms every week.” She’s starring in the new ABC Family series “Bunheads,” which premieres June 11 and is written and executive-produced by Amy Sherman Palladino, the creator of “Gilmore Girls.” Foster plays Michelle, a Las Vegas show girl with a stalled career who impulsively gets married and moves to her husband’s sleepy coastal town where she finds fulfilment teaching at her mother-in-law’s dance studio. “I’m a huge fan of ‘Gilmore Girls,’” Foster says. “Amy’s one of a kind. She really has a point of view. When they offered me the ‘Bunheads’ part, I cried. Whenever something’s overwhelming, I cry.”

Last year, Sherman Palladino saw Foster’s Tony Award-winning performance in “Anything Goes” and, she says, “There was something about her in that show. The next time I was in New York we had a delightful little lunch. Sutton is warm, funny and smart. I have absolutely no proof that this is going to work, but she is the only person I was interested in. This is the chick.

“To get where she’s gotten in her career you have to have nerves of steel and a bit of a sharp tongue,” continues Sherman Palladino, who freely tosses out four letter words for effect. “She’s not bitter or snarky. She’s world-wise and smart. On screen, when you put her with kids, there’s this kindness. I feel completely responsible for her moving to L.A. I want to make sure she has a nice place to live and that her mail is delivered on time.”

Foster doesn’t rule out moving back to Manhattan at some point. She swapped apartments with a Los Angeles friend who was heading East, leaving the proverbial door open. Her brother Hunter, who was nominated for a Tony Award for “Million Dollar Quartet,” lives in the city, and two years ago, she bought a house in the Catskills, one hour northwest of Manhattan, in the same community where Hunter and other theater friends own homes. (The Foster siblings have shared the Broadway stage twice, in 1996’s “Grease” and 2000’s “Les Miserables.”)

In 2002, during the pre-Broadway tryouts for “Thoroughly Modern Millie,” Foster was plucked from the chorus to replace the lead. At first her performance received several negative reviews and there were calls for the producers to replace her with a known star. They didn’t, and Sutton realized that the critics don’t always have the last word when she won the Tony award for best leading actress in a musical.

Over the next decade, Foster took on a disparate array of roles, from an ambivalent Broadway starlet in “The Drowsy Chaperone” to Princess Fiona in “Shrek the Musical.” But it’s Reno Sweeney, the lead role in 2011’s “Anything Goes,” that, she says, changed her life. “It was an exhausting and physically demanding show. Reno was a hard role and I had to convince myself I could do it,” says Foster, who, to mentally prepare herself, taped positive affirmations like “You rock” and “Believe in yourself” to her apartment and dressing-room mirrors. “Reno has a big personality and doesn’t apologize for anything. What scared me the most is that she’s very different from who I am. She walks into a room with ease and that’s something I struggle with.”

To begin filming “Bunheads,” Foster had to leave “Anything Goes” in March, six weeks before her contract expired. “I bawled for two hours after my last [performance],” she says, noting that singing brings her the greatest joy. So will she be belting out any tunes in “Bunheads”? “Not unless an organic moment comes up,” says Sherman Palladino. “Foster is really into seeing what her life as a straight actress will be like.”

Foster, who was born in Augusta, Ga., started taking dance classes when she was four. According to Sherman Palladino, she easily falls into character when Michelle instructs the young dancers. “She’s tough with the girls, but she sees herself in those girls because she was once one of them,” she says. Foster has taught cabaret performance at New York University’s Tisch Department of Drama and held several dance workshops at Ball State University in Muncie, Ind. She’ll receive an honorary doctorate from the college at its May commencement ceremony. With her cross-country move, she says, “I’d love to be affiliated with UCLA. I hope to integrate teaching into my life forever.”

As for her love life, Foster has been linked to several Broadway leading men, but she says she’s currently single. Her ex-husband, Christian Borle, is grabbing headlines for his role in NBC’s “Smash,” and she made her off-Broadway debut in 2010’s “Trust” with ex-boyfriend Bobby Cannavale. “It does make moving easier if you’re unattached,” Foster says. “I would love to be able to have somebody in my life, but I have no regrets.”

She also has no time. On top of everything else, Foster also pursues a number of DIY hobbies: painting and homey crafts like crocheting and making blankets. “I’ve made 15 of them,” she says. “I do a lot of granny square action. I also work a lot with collage and do ink drawings and acrylics. I always have 15 projects going at once.”