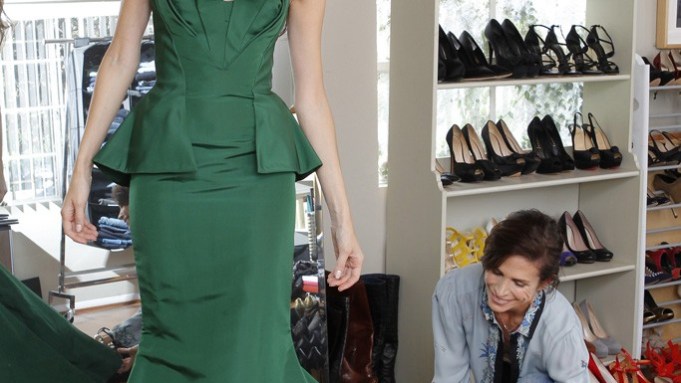 From the beginning for Allison Williams, it was all about Oscar.

“I told her [stylist Cristina Ehrlich] when I first met her that my dream — my dream — is to wear Oscar de la Renta. It is one of the only designers I feel like I’ve always known about, and I’ve always noticed. It is so elegant and beautiful,” she says. “He has been so good for so long, he knows exactly what he is doing.”

Two days before the Emmy Awards in her last fitting at Ehrlich’s Los Angeles studio, Allison had her Oscar. The dress was a strapless, emerald green gown from the designer’s resort collection with a structured top rimmed with peplum before cascading into a Champagne flute-shaped skirt.

In the sunlit studio, the pairing of the girl — literally one of the girls on “Girls,” the HBO hit nominated in the Outstanding Comedy Series Emmys category — and the dress seemed effortless, but, in fact, was not. It was the culmination of a year of work to slowly build Williams’ fashion profile by introducing her to the style set at the Met ball and New York Fashion Week. The Emmys would be her major fashion coming-out party for the general public.

“We’ve had a very planned-out way that we wanted to see the evolution of her style come to fruition,” says Ehrlich. “It was always about getting to this moment where she would wear Oscar de la Renta.”

The plan has been to catapult Williams into the pantheon of American beauties the likes of Brooke Shields, whom she resembles, by having her wear predominantly American designers (Ralph Lauren and Donna Karan, for example).

“She’s a thinking actress in the company of Claire Danes or Natalie Portman,” Ehrlich says. “Her career is something she’s not winging,”

Admittedly Type A, Williams, the daughter of NBC News anchor Brian Williams, brought binders filled with pictures of celebrities wearing different outfits for her initial meeting with the stylist.

“I just have always been so interested in the way actors and actresses present themselves to the world because I think it is very important and it affects the way people see you as an actor and whether or not you still can [be] believable on the screen,” Williams says. “You have to be careful about making sure that there isn’t too much of you out there so you can still play characters.”

Although she thinks through each fashion decision, Williams insists she doesn’t have an agenda when choosing a dress.

“I’m drawn to what I’m drawn to,” she says, explaining, “I wear jeans and loafers everyday, mostly casual, but when I really turn it on, I like a classic, simple look.”

Williams’ approach could garner her a deal with a fashion house, but Williams said she hasn’t even “tiptoed” into the endorsement arena yet. Ehrlich believes it’s too soon.

“It is important with these girls that it doesn’t happen too quick. I would see her doing something with beauty, whether it is fragrance or Neutrogena or something that has to do with all-American skin care,” she says, adding, “Then, down the line with fashion, I could see her definitely doing that, maybe in a little bit of time. I think it is important not to explode the girls all too fast.”